I Have To See The 'Fright Night' Remake...

... simply because it stars The Doctor himself, David Tennant!!! As a new fan (ok, so it took me awhile... but I'm into it now!!!) of the awesome Dr. Who series, I feel even more compelled to see this movie. Here is the first official photo of Tennant as magician Peter Vincent, a role originally portrayed by Roddy McDowell. 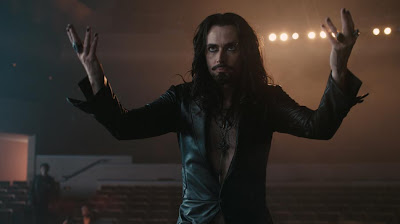 Ok, so its not much to go on... but I (and millions of other Dr Who fans) have been wating for Tennant to do something else. Will this be it? The film has a strong cast (Anton Yelchin, Colin Farrell) and a late summer release date, so we shall see. Thanks to Cinema Blend for the picture.
Posted by Mike D. at 10:38 AM