Hawkman: The Rodney Dangerfield of Superheroes 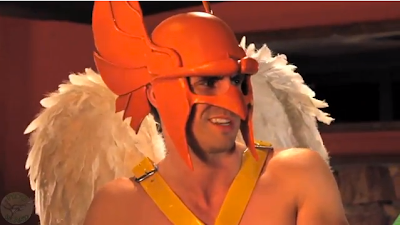 The guys over at Frog Island decided to take a peek inside the after hours shenanigans of everyones favorite super heroes who have gotten the movie treatment... and then wonder why Hawkman hasn't joined the ranks. This is one of the funniest nerd videos I have ever seen.

Holy shit!!!! Superman said he wanted to punch through his skull!!! Hawkman told Batman to go fuck himself and abused Nick Fury for being black!!! Thor had the nerve to call another superhero gay!!! Best nerd video.... EVER!!!!!!!!
Posted by Mike D. at 1:10 AM