The CCD Movie Review: Do Not Disturb

Anthology movies are some of my all time favorite films. Creepshow, Coffee & Cigarettes, and Pulp Fiction are some of my favorite movies EVER. The thing about an anthology film is that it gives the viewer separate chances to meet many different characters in their own segments, and then see them in relation to the bigger picture of the whole film. I have always been a fan of that. Do Not Disturb is excellent at doing this and that is why I think I enjoyed it so much. 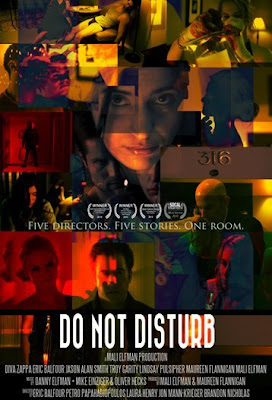 The film is divided up into 5 sections, all revolving around the same hotel room (Rm 316). While this is sure to draw some immediate comparisons to the anthology film Four Rooms, let me assure you that the locale of a hotel is pretty much the only similarity the films share. This film focuses on The Maid (played by the lovely Diva Zappa) and her interaction with the people who occupy room 316 over the course of a few days. There are some recognizable faces in the cast, most notably Eric Balfour (Six Feet Under, Hell Ride), Troy Garity (Sunshine, Barbershop) and Lindsay Pulsipher (True Blood). Writer and producer Mali Elfman also gets to be a part of the action, and she helps to round out an excellent ensemble cast that makes this movie so appealing.

While the 5 different stories cover everything from organ harvesting to gay teenagers to aliens, the most impressive feat is that there are 5 different directors that put this film together. Each scene has its own vision and direction, but is part of a bigger picture that comes together quite well in the end. With an anthology film, this can be quite the task. It's impressive enough when 1 director gets it right, but to have 5 different directors working towards the same finish and having it turn out so well... lets just say congratulations are definitely in order. This could have been a messy film, but instead we get a crisp, interesting story and characters that will stick with you long after the film is done. Not to mention the phenomenal animation sequence that starts the movie and the wonderful score by the legendary Danny Elfman and Incubus guitarist Mike Einzinger. All in all, a quality independent film that deserves a shot for your viewing pleasure.


Do Not Disturb is currently available on Itunes for download, And can be viewed on Amazon.com and Video On Demand in the privacy of your own home. Make sure you check it out!
Posted by Mike D. at 2:28 AM