Reality Check- Watching 'Jersey Shore Season 3'
I know it’s been so long, my friends. While coping with the general difficulties of being a full-time educator and part time Master’s student, I have been greatly ignoring my blogging responsibilities. However, I think I have finally figured out how to balance my many roles and can finally return to one I enjoy a lot… writing about television. I haven’t really picked up on too many new shows, but I continue to watch the old ones. So today, I’ve decided I’m going to give you a brief run down on some of the lunacy that’s been going on in reality land… and I suppose I have to start with everybody’s favorite idiots, the cast of the Jersey Shore.
This season, we actually saw the total deterioration of the most normal Shore cast member… Vin. He went from a lovable 21-year-old just trying to get a little booty and stuck in the middle of crazy land, to a full blown, spray tanned, whore-banging, player guido (I just had to add guido to my new computer’s dictionary, thus losing a piece of my soul). It was a little sad to see him get drunk and be mean to Snooks, who, though totally insane, is kinda lovable in her meatbally kind of way.
Speaking of meatballs, we also met Deena, who is definitely an upgrade from Angelina, but doesn’t add anything to the show…we already have a meatball who falls off of bars. That being said, she seems kind of nice and fun, so she can stay around!
JWoww finally broke up with her boyfriend Tom, after she already fell for permanent shore resident, Roger. About time no? I don’t think that the show really portrayed Tom fairly though… I mean, she cheated on him in like the first episode and the guy stayed around… wouldn’t you be paranoid about what your significant other was doing too? I mean look at Sam and Ronnie? That being said, I have never been much of a Jenny fan, but she grew on me a little bit this season. I wish her and her juicehead much luck in all their future endeavors.

Pauly D. was kind of nonexistent this season, no? Except for when him and Vin would team up and make funny jokes (denimdenimdenim, being my favorite of the season by FAR), he was kinda boring.
Also boring- the Situation! This guy really lost his mojo, no? I mean no one in the house seems to really give a crap about him and his antics anymore… and either do I.
This brings us to Ron and Sam. Now, I’m going to make a very important statement to start this off. I am not a fan of Ron OR Sam. Now I am going to make a Public Service Announcement in regards to this statement. Young women of the world, get out of your crappy abusive relationships! 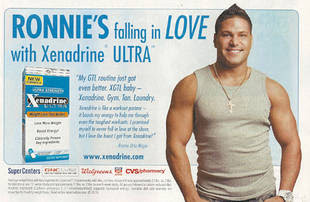 I understand that Sam is immature and kind of dumb, but that is no excuse for her things to get destroyed. I understand that she won’t forgive Ron for “Miami” but it’s kind of hard to erase the picture of your man tonguing down two girls in a bar and then climbing into bed with you. I understand that she should have told Ron that she invited that funny looking dude to Karma to make him jealous, but I don’t understand why he would go so crazy that she made out with him YEARS before. She’s sneaky? Why? Because she existed before she was with that gorilla that survives only off of steroids and Xenadrine? Ron is an asshole. Plain and simple. She may be a silly young girl, but she has NO REASON to be treated the way she was. The fact that MTV tried to make her the villain in this situation makes me completely hate humanity. Either way, I can’t wait to see more Shore next season.
Recap 1 (in a while) down. I’ll be back soon with an ode to the other love of my life “Boston” Rob Mariano and Survivor: Redemption Island.
Link to Kate Jones' previous installment of 'Reality Check'
Posted by JBond at 12:44 AM