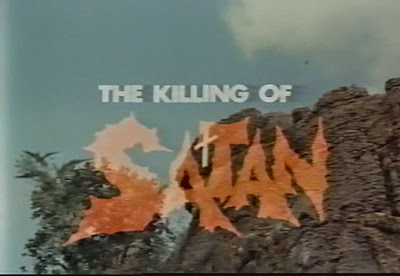 I have a great group of friends who bother each other all day long with fun emails of weird and wonderful shit. This email comradery was what led to me creating CCD in the first place. Most of the fun stuff that we send back & forth often ends up filling our posts. I can't find all this cool shit on my own.

Our good friend Tommy Lombardozzi sent me this trailer for 'The Killing Of Satan'... and from the moment I watched it my head was spinning. It's so terrible that I must see it. See for yourself:

Here is the official synopsis:

"A Filipino-made horror-fantasy movie about a man who is chosen by his dead uncle to battle the forces of evil. He fights a being called "The Prince of Magic," who shoots rays from his hands, makes heads spin around and hypnotizes people. He finally faces Satan himself and engages him in a battle of magic."

Wow... just wow. That is crazy. But not to be undone, my boy Glenn Gracia came over the top with this puppy. It's called 'Hard Ticket To Hawaii' and is another must see after these clips:

What. The. Fuck. He just hit the dude with the car and then shot his airborne body with a rocket launcher... and then blew up the blow up doll with a second rocket.... yeah, I gotta get this one. Here is the official synopsis:

Two drug enforcement agents are killed on a private Hawaiian island. Donna and Taryn, two operatives for The Agency, accidentally intercept a delivery of diamonds intended for drug lord Seth Romero, who takes exception and tries to get them back. Soon other Agency operatives get involved, and a full-scale fight to the finish ensues, complicated here and there by an escaped snake made deadly by Toxic Waste!

Good god... these truly are terrible, but in a good way. Thanks to Glen, Tommy, & the rest of the email crew. Keep them emails coming kids!!!
Posted by Mike D. at 9:36 AM