OMG... Black Dynamite: Slave Island Is Upon Us 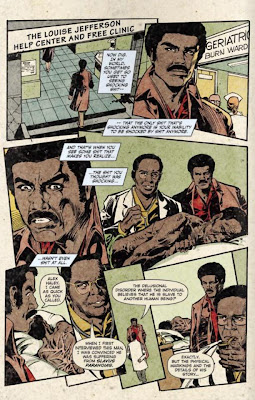 We told you guys awhile back that Ape Entertainment & Ars Nova were making a comic book adaption of 'Black Dynamite'. 'Black Dynamite' is one of my favorite movies of the past five years and makes me cry laughing every time I watch it. So when we were at the NYC Comic Con and found out there was going to be a comic entitled 'Slave Island', you know I was in. It's been a few months with not much news... until I got this email yesterday from Black Dynamite's main man (and dead sidekick) Bullhorn:


Bullhorn here to make the way clear, for the baddest comic book of the year!

BLACK DYNAMITE: SLAVE ISLAND will make you see the light
based on the film written by Byron Minns, Scott Sanders and Michael Jai White!
Brian Ash of The Boondocks is the author of this book
and the artist Jun Lofamia gives Dynamite his look!

It's the coolest comic on paper, if you know what I mean
cause BD's the toughest muthaf*cka that the world ever seen
Whether hustle or tussle, you know who's gonna win it.
Hell, I bought thirteen copies, and I ain't even in it!


So if you're lookin’ for some action and a comic that’s out of sight
make sure you pick up SLAVE ISLAND featuring … BLACK DYNAMITE!

If you seen Black Dynamite, you know that Bullhorn and his rhyming speeches are some of the best part of the movie. Kudos to Ape Entertainment & Ars Nova for wording their press release in the manner of one of the characters from the movie!!! They also included what seems to be the official cover art for the book, which is due April 4th, 2011. 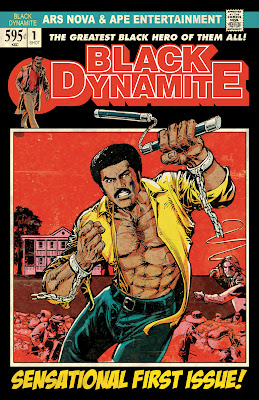 Make sure you get to your local Mom & Pop comic shop and support 'Black Dynamite' you jive ass turkey... this is going to be epic!!!
Posted by Mike D. at 10:01 AM