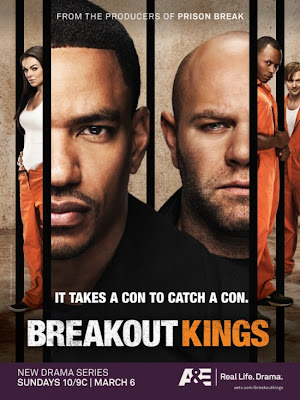 Last night was the premiere episode of A & E's new TV program 'Breakout Kings', and boy am I hooked. The show comes from two of the writers/producers of 'Prison Break', which means they are familiar with the "con on the run" genre that Prison Break did better then any show I have ever seen. It is also executive produced & had its pilot directed by Gavin Hood, who despite fucking up the 'X-Men Origins: Wolverine' movie a bit (What?... I kinda liked it, but no one else did) is an Academy Award winner for 'Tstotsi'. Basically it comes from good stock. That's always a start, no? 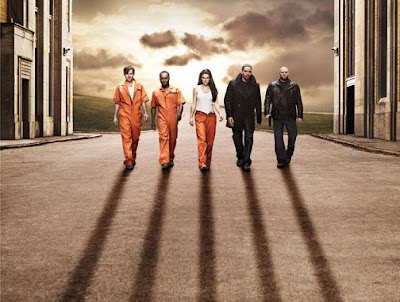 The cast is also quite capable. Laz Alonzo (Avatar) plays Charlie, the leader of a special branch of the U.S. Marshalls. He is joined by street cop Ray (played by Domenick Lombardozzi, or Dom from 'Entourage'!) and there job is to track down the toughest breakout guys to escape from jail. What better way then to recruit a few of the other hardest guys & gals that ever gave them a hard time after they escaped the big house? They get former Doctor and child progeny Lloyd (Jimmi Simpson), drug dealer Shea (Malcolm Goodwin), and con artist Philly (Nicole Steinwedell) to help the cause. The cast is funny and well chosen, and mesh together well. It has only been one episode but I am hooked.

It didn't hurt that in the previews of whats to come this season they dropped the name of a certain fugitive: Teddy 'T-Bag' Bagwell. Anybody who ever watched 'Prison Break' knows T-Bag well, and I am sure Robert Knepper's guest starring spot on this show is sure to bear some wonderful fruit. The guy is wonderful as the bad guy you love to hate, and he will make it happen. This one airs every Sunday @ 9 PM on A&E, so make sure you give it a gander. I know I will be.
Posted by Mike D. at 12:43 AM