150 Lines That Make These Movies Great!!! 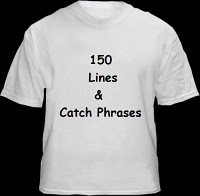 If you don't know all 150 of these lines, then you are not a hardcore movie geek... and you quite possibly have been living under a boulder (a rock ain't big enough to live under if you don't know these classics!). I hope you enjoy this video. Exophrine really killed this one... good job guys.

- 'POLTERGEIST'...Carol Anne Freeling, notifying her parents of the spirits present

- 'THE GOONIES'...Sloth, calling the attention of the children he's about to save

"I love the smell of napalm in the morning. You know, one time we had a hill. bombed, for 12 hours. When it was all over, I walked up. We didn't find one. of 'em, not one stinkin' dink body. The smell, you know that gasoline smell,. the whole hill. Smelled like ... victory."

"Say 'hello' to my little friend!"

- 'SCARFACE'...Tony Montana, shouting his battle cry before an ambush

-'TOMBSTONE'...Doc Holiday, volunteering to participate in a stand-off

"Hello, my name is Inigo Montoya. You killed my father. Prepare to die."

- 'THE PRINCESS BRIDE'...Inigo Montoya, to the 6-fingered man, before his final battle with him

- 'THE SHINING'...Jack Torrance, maniacally calling to his wife with the intent to kill

- 'STAR TREK II: THE WRATH OF KAHN'...Capt. Kirk, screaming out of frustration

- 'IN THE HEAT OF THE NIGHT'...Virgil Tibbs, saying what they call him at home

- 'WARGAMES'...the computer system WOPR, asking its user to play a game with it

- 'THIS IS SPINAL TAP'...Nigel Tufnel, showing off the power of his guitar amps

- 'ANNIE HALL'...Annie Hall, reacting to her boyfriend in a conversation

"I have come here to chew bubblegum and kick ass, and I'm all out of bubblegum."

- Nada, announcing his intentions at a city bank

- 'RAMBO III'...John Rambo, angrily introducing himself to a Russian commander

- 'AIRPLANE!'...Stryker, reacting to a request to land a plane (pilots incapacitated)

- 'STAR TREK'...Leonard "Bones" McCoy, in a discussion about future technology

- 'ROCKY III'...Clubber Lang, in an interview prior to fighting Rocky Balboa

- 'TAXI DRIVER'...Travis Bickle, practicing a confrontation in the mirror

- 'DIRTY HARRY'...Harry, speaking to a criminal suspect before arresting him

"WHAT IS YOUR MAJOR MALFUNCTION, NUMBNUTS?!?"

"There can be only one."

- 'HELLBOY'...Hellboy, expressing his feeling about his new obligation to fight

"YOU SHALL NOT PASS!"

- 'LORD OF THE RINGS: THE FELLOWSHIP OF THE RING'...Gandalf, taking a stand against the pursuing Balrog

"Of course, you know, this means WAR!"

- 'A NIGHT AT THE OPERA'...Otis Driftwood, to a representative of New York after a misunderstanding

"Houston, we have a problem."

"Lions and tigers and bears, oh my!"

- 'THE WIZARD OF OZ'...Dorothy, Tinman, and Scarecrow, afraid of the dangers of the woods

"Warriors, come out to play-ee-ay!"

- 'THE WARRIORS'...Luther, taunting the Warriors, a gang accused of murder

- 'BAD BOYS II'...Marcus Burnett, to Mike Lowrey, realizing the danger they're in

"I'm as mad as hell, and I'm not gonna take this anymore!"

- 'NETWORK'...Howard Beale, broadcasting to the nation, to get mad and scream

- 'CARLITO'S WAY'...Carlito 'Charlie' Brigante, to enemies before entering a room

- 'THE INCREDIBLE HULK'...Bruce Banner, as the Hulk, before hitting the ground

- 'STAR TREK: FIRST CONTACT'...The Borg, to the USS Enterprise crew, informing them of the impending invasion

- 'AIR FORCE ONE'...President Marshall, to Egor Korshunov, before throwing him off the cargo bay

"Take your stinking paws off me, you damn dirty ape!"

- 'PLANET OF THE APES'...Taylor, telling a gorilla to unhand him

- 'THE TERMINATOR'...Terminator, to a police front desk clerk before breaking in

"Thank you for your cooperation."

- 'ROBOCOP'...Robocop, to convenience store owners, after stopping a criminal

- 'ACE VENTURA: PET DETECTIVE'...Ace, to himself, after his landlord leaves

"Ding-dong, the witch is dead!"

- 'THE WIZARD OF OZ'...The Munchkins, celebrating the Wicked Witch's death

"I want my two dollars!"

- 'BETTER OFF DEAD'...Paperboy Johnny, to Lane Meyer, insisting he pay for his newspaper subscription

- 'JERRY MAGUIRE'...Jerry, to Rod Tidwell, obeying him in order to stay his agent

"Greed, for lack of a better word, is good."

- 'WALL STREET'...Gordon Gekko, to a seminar crowd, on how to be successful

- 'BORAT: CULTURAL LEARNINGS OF AMERICA FOR MAKE BENEFIT GLORIOUS NATION OF KAZAKHSTAN'...Borat, to a random woman, asking for a price for sex.

- 'AUSTIN POWERS: INTERNATIONAL MAN OF MYSTERY'...Dr. Evil, to his crew, declaring the asking price for holding the world for ransom

- 'ROBOCOP'...Bixby Snyder, to the camera, on the thought of having two women

- 'BILL & TED'S EXCELLENT ADVENTURE'...Bill & Ted, reacting to the King's command to take them to the iron maiden

- 'BILL & TED'S EXCELLENT ADVENTURE'...Bill & Ted, reacting to the King's command to execute them

"You can't handle the truth!"

"YES, they deserved to die, and I hope they burn in hell!"

- 'A TIME TO KILL'...Carl Lee Hailey, on whether child rapists deserve to die

"Damn you. Goddamn you all to hell!"

- 'PLANET OF THE APES'...Taylor, to the dead men of history, in reaction to the reason for why things are

- 'MOONSTRUCK'...Loretta to Ronny after saying he's in love with her

- 'THE DARK KNIGHT'...The Joker, telling a story of his father

"We're on a mission from God."

- 'THE BLUES BROTHERS'...Elwood Blues, explaining why they need Mr. Fabulous

"Shaa, and monkeys might fly out of my butt!"

- 'WAYNE'S WORLD'...Wayne, reacting to hosting Wayne's World for a living

- 'CLUELESS'...Cher, after pushing off a guy who was trying to hold onto her

"I sell drugs to the community!"

- 'BLACK DYNAMITE'...Chocolate Giddy-Up, identifying himself as one Black Dynamite's at war with

- 'COBRA'...Marion Cobretti, to a grocery store robber, before disabling him

- 'DIE HARD'...John McClane, spewing out a phrase after Hans Gruber predicts him doing it

- 'SCENT OF A WOMAN'...Lt. Col. Frank Slade, after Charlie Simms tells him about his scholarship

"You're only supposed to blow the bloody doors off!"

- 'THE ITALIAN JOB'...Charlie Croker, telling Left-Ear about how much explosive he should have used

"You're gonna need a bigger boat."

- 'JAWS'...Martin Brody to Robert Shaw, warning of the shark's size

- 'THE TREASURE OF THE SIERRA MADRE'...Gold Hat, reacting to Dobbs prompting him to prove they are policemen

"Toto, I have a feeling we're not in Kansas anymore."

- 'THE WIZARD OF OZ'...Dorothy, to her dog, realizing where they are

- 'AMERICAN PIE'...Michelle, to Jim, about a rather personal moment

- 'BACK TO THE FUTURE'...Doc Brown, expressing his shock that Marty's back FROM the future

- 'THE PRINCESS BRIDE'...Vizzini, reacting in disbelief

"My momma always said, 'Life is like a box of chocolates: you never know what you're gonna get."'

- 'FORREST GUMP'...Forrest, telling someone at a bus stop his mother's musings

- 'FREAKS'...The Freaks of the circus chanting their acceptance of a friend

"I ate his liver with some fava beans and a nice chianti."

- 'SILENCE OF THE LAMBS'...Hannibal Lecter, telling Clarice Starling what he did to a census taker

"THE POWER OF CHRIST COMPELS YOU!!!"

- 'THE EXORCIST'...Father Merrin and Father Damien Karras to a possessed Regan

"I'm gonna make him an offer he can't refuse."

- 'THE GODFATHER'...Don Corleone, to Johnny Fontane, about his plans for a Hollywood director

- 'SOYLENT GREEN'.Detective Thorn, to a surrounding crowd, about the secret of soylent green

- 'THE GODFATHER PART II'...Michael Corleone, to Fredo, about his betrayal to the Corleon family

- 'ON THE WATERFRONT'...Terry Malloy, to his brother Charley, on what could have been without fixing fights

- 'CASABLANCA'...Rick Blaine, to Ilsa Lund, cheering her up while breaking up

"Never give up, never surrender!"

- 'THE GOONIES'...Mikey Walsh, to Andy Charmichael, on never giving up

"They may take our lives, but they'll never take...OUR FREEDOM!"

- 'BRAVEHEART'...William Wallace, to his army, before going into battle

- 'GONE WITH THE WIND'...Rhett Butler, to Scarlett, answering her question of where to go, what to do

- 'AUSTIN POWERS: THE SPY WHO SHAGGED ME'...Austin Powers, responding to a naughty comment by Felicity Shagwell

"Just when I thought I was out, they pull me back in!"

- 'THE GODFATHER PART III'...Michael Corleone, commenting on the impossibility to escape from mob life

- 'E.T.: THE EXTRA-TERRESTRIAL'...E.T., the alien, declaring his desire to make contact with his native alien race

- 'THE WIZARD OF OZ'...Dorothy, performing the ritual of returning back to her home from Oz

- 'ROCKY'...Rocky Balboa, giving a "shout out" to his then girlfriend, Adrian Pennino

- 'JERRY MAGUIRE'...Jerry Maguire, to Dorothy Boyd, expressing his love for her

- 'WHO FRAMED ROGER RABBIT?'...Jessica Rabbit, to Eddie Valiant, on how hard it is to be a sultry, cartoon woman

"Why don't you come up sometime, and see me?"

- 'SHE DONE HIM WRONG'...Lady Lou, hitting on a well-dressed man in a uniform

- 'THE MASK'...The Mask, greeting the night with an expression of excitement

"Mrs. Robinson, you're trying to seduce me!"

- 'THE GRADUATE'...Ben Braddock, calling Mrs. Robinson out on plying her wiles

"I'll have what she's having."

- 'WHEN HARRY MET SALLY'...A female restaurant patron, to a server, asking for whatever Sally Albright ate

- 'THE LORD OF THE RINGS: THE TWO TOWERS'...Gollum, answering Faramir's question, "What did they steal?", referring to the ring

- 'STAR WARS EPISODE VI: RETURN OF THE JEDI'...Admiral Ackbar, after realizing that the claim the 2nd Death Star is operational

- 'TOMMY BOY'...Tommy Callahan III, after a mast hits him upside the head

- 'CLUELESS'...Cher Horowitz, after her Jeep almost collides with a bicyclist

- 'THE MARATHON MAN'...Dr. Szell, to Thomas "Babe" Levy, as he drills into his teeth without anesthetic

- 'THE KARATE KID'...A karate class, to John Kreese, confirming they understand his instruction

"Sounds like SOMEBODY'S got a case of the Mondays!"

- 'OFFICE SPACE'...Bill Lumbergh, transitioning into another topic of conversation

- 'DONNIE BRASCO'...Donnie Brasco and "Lefty" Ruggiero, having small-talk before a job

- 'SCARFACE'...Tony Montana, to Manny Ribera, on how to attract women

- 'TITANIC'...Jack Dawson, expressing excitement at the front end of the Titanic

- 'THE LION KING'...Timon, Pumbaa, and Simba, singing their care-free mantra

- 'ANIMAL HOUSE'...Bluto and Otter, to their fraternity brothers, encouraging them to hold a toga party

- 'LITTLE SHOP OF HORRORS'...Audrey II, to Seymour Krelborn, asking him for more food, asking for blood

"Pay no attention to that man behind the curtain!"

- 'THE WIZARD OF OZ'...The Wizard, to Dorothy, the Scarecrow, the Cowardly Lion, and the Tinman, upon discovering he's not a big, scary figure, but a man hiding behind a curtain

"Forget it, Jake. It's Chinatown."

- 'CHINATOWN'...Walsh, to J.J. Gittes, discouraging him from causing any more trouble

- 'STAR TREK'...Spock, to the Vulcan Science Academy, expressing his farewell

"May the Force be with you."

- 'STAR WARS EPISODE IV: A NEW HOPE'...Jan Dodonna, to the Rebels, wishing them luck before attacking the Death Star

- 'BABE'...Farmer Hogget, to his sheep-pig, Babe, after winning a sheepdog contest

- FIRST BLOOD'...Col. Trautman, to John Rambo, telling him his war in a small town is over

"After all, tomorrow is another day."

- 'GONE WITH THE WIND'...Scarlett O'Hara to herself, convinced she can get Rhett Butler back

Hope you enjoyed this video!

Make sure you click the link above and leave these guys some comments. The killed it!!!
Posted by Mr. Mike D. at 12:00 AM