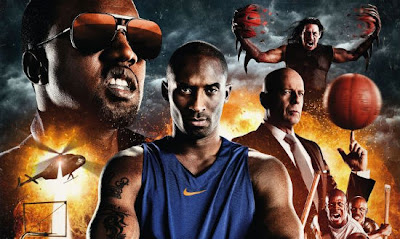 I saw the teaser trailer and posters for Robert Rodriguez's mini movie for Nike & Kobe Bryant called 'The Black Mamba' a few weeks ago, but held up on posting about it untill the complete film came out during All Star Weekend. After Bryant's MVP performance in Sunday nights All Star Game, I felt it was fitting to feature this cool poster and the complete short film here for you guys. I hope you enjoy Rodriguez's offbeat, zany grindhouse long form sneaker commercial/movie featuring Danny Trejo, Bruce Willis, and the rest of the Rodriguez regulars. Go get 'em Kobe... you really are the shit!!!

Thanks to /Film for the clip and artwork. You guys rock.
Posted by Mike D. at 5:38 AM