I Have A Whole New Respect For Kristen Stewart 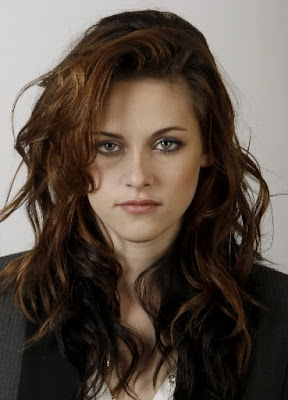 Wow... just wow. I never thought those words would come out of my mouth. I have made fun of the single-emotioned Kristen Stewart for a long time here on CCD. As someone who read the Twilight books (yeah, I read em... so what? They are good!!!) and seen the movies, I can not understand why this young actress that is making crazy paper and starring in a huge franchise is always looking so sad... it don't make any sense. While she may not have any other emotion other then emo, she does have impeccable common sense. 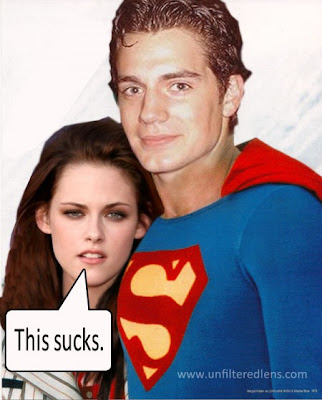 What am I babbling about, you ask? Well, it seems that Zack Snyder had wanted K Stew for Lois Lane in his new Superman reboot/relaunch to appear alongside opposite of the recently cast Henry Cavill. Really? Why? I don't see it... and neither does Kristen. Check out what the Daily News has to say:


According to the New York Daily News, Stewart met with Snyder and his producer/wife Deborah to discuss the role. Snyder didn’t formally offer the role to her, but had “definite interest.” Stewart, however “ultimately passed” indicating she was “caught off guard” by the success of Twilight and wanted to concentrate on “smaller, independent films.” The best part is that the News reports Snyder felt “slighted” by the actress and that she “wasted his time.” When contacting Stewart’s publicist, all they would say was that she “did not read for the role” which could easily mean she took a meeting. Snyder’s people didn’t comment.

So Snyder wanted her for the role, and she went to hear the pitch, but immediately told him no thank you. And now he is pissy. Guess what? I think that was really brave of her. First of, Superman would have been a payday for her. Like it or not, she is an established box office draw. She would have got some big bucks either up front or on the back end. But she did not like the part. Good for her. As for not wanting to get involved in another franchise, I ask you this: Can you blame her? This whole Twilight experience must have been quite trying and exhausting. When it's all said and done, this has been her whole life for like 5 years. I'm glad she is trying to make different types of movies.. I for one loved her 'Adventureland'. Lastly, I think K Stew is a hottie... I truly love her emo ass!!! But by not casting her, it opens the door for a ton of young hot actresses to play the role of Lois Lane. Three of CCD's former OHC's (Obscure Hot Chicks) of the day, Emily Browning, Mary Elizabeth Winstead, and Jennifer Lawrence are all being considered... as well as ever other actress in Hollywood. This could be a career maker for someone...

All in all, I respect K Stew for saying "Thanks but no thanks". Now only if she could get Nic Cage to start doing the same... if she could do that, I would love her even more!!! 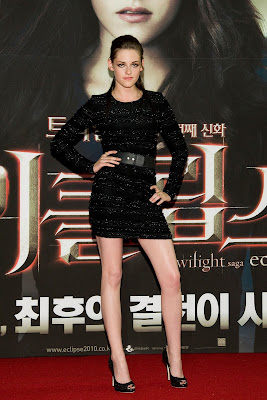