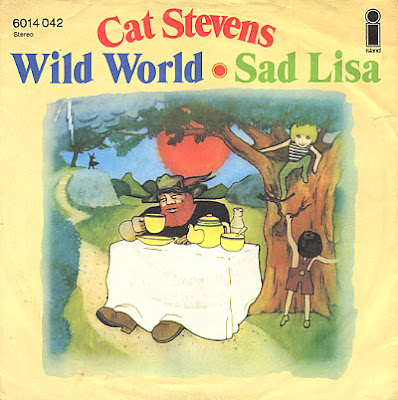 I have told you guys how obsessed I have become over the UK version of the TV show 'Skins' in the past few weeks. I can not get enough of the show (I am just starting Season 3!) Seasons 1 & 2 revolve around the lives of Tony, Michelle, Cassie, Sid, Anwar, Maxxie, Chris, & Jal... they are the sickest group of teens you have ever seen. At the end of Season 1, there was one of the most amazing climaxes I have ever seen. It was amazing... and during the final scene, all of the sudden Cat Steven's classic song 'Wild World' came on. I won't talk any more about the scene because it would involve spoilers (and everyone should watch this show on Netflix Instant!!!) but since I watched the 'Wild World' segment I can not get the song out of my head. I love the version that the 'Skins' cast did, it ruins the end of Season 1... but it is a great arrangement. I always loved the song.... and now I love it even more since it is tied to my new favorite show. So here you go... enjoy Mr. Steven's classic one time:

Extra Tidbit: I always had a love for the Lily Allen song 'The Littlest Things', which kind of samples the cord progression and vocal arrangement of 'Wild World'. Since I'm on a total UK/British kick and can't get enough of the other side of the pond, here it is... enjoy: