Thank You Spiderman Musical... Thank You!!! 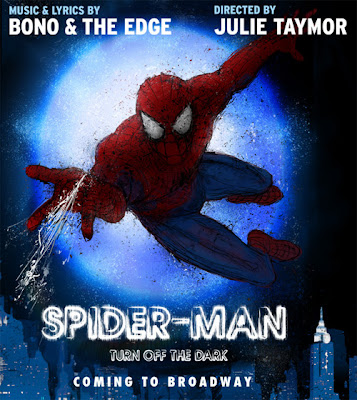 As a comic book geek of epic proportions, I have mixed feelings about 'Spiderman: Turn Off the Dark'. On one hand, you would think that a Spiderman musical is probably the only kind of musical a comic geek would ever see. On the flipside, this is the kind of commercialization that drives true fans crazy. As the bills were piling up for the show (it's price tag is over $65 million!) and the problems kept coming, I began to laugh at Julie Taymor and those U2 dickwads... they had a surefire story to work with. Who the fuck were they to change HOW Spiderman gets bit by a spider or invent villains when Spidey has about 75 in his personal rogue gallery. They took a lot of risks, most for no reason at all... and now they are hitting rock bottom.

This was a tough week. First, they pushed the official opening back for a 3rd time to work out some kinks. Then came the rumor of massive re-writes and editing of the shows script. Then the ultimate disaster happened: A stuntman fell 30 feet when his safety harness broke. Thanks to the wonders of modern technology (and TMZ), here it is:

That is wonderful... I never want to see anybody get hurt, but somebody or something has to stop these assholes in charge of the show, and this may be it. Apparently, the Actors Union & the State Department of Labor have shut the show down until they can work out any and all safety issues with the show. Good luck with that.... by the time they get this all worked out, I will be about 65 and they will probably be on reboot #4 of the Spiderman film franchise. Either way, I still want to see this trainwreck....
Posted by Mike D. at 12:48 AM