My New TV Mid-Season Break Guilty Pleasure... The Sing Off!!!

This is the time of year when most network TV shows take a bit of a break in order to allow networks freedom to show some holiday programming and other short lived special shows. Personally, I can not wait till Charlie Brown Christmas and Wipeout: Holiday Edition, but there is another show that is going to help me through the down time. It's called The Sing Off, and it airs Monday nights on NBC. Last night was the premiere episode, and I can honestly say... I am intrigued. 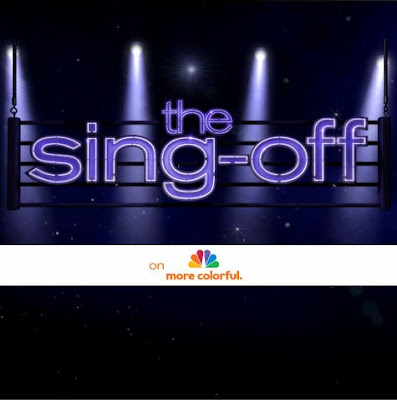 Basically, its NBC trying to capitalize off the success of Fox's smash hit Glee (which just happens to be on mid season break!!!). Since all of America is enamored by Glee and the acapella singing movement across is growing rapidly, it makes sense for NBC to get 10 groups together from around the country and have them compete for 100,000 grand in a short season (4 weeks!) singing competiton. How can this be bad? I am a fan of Glee, and music in general. I love seeing some new spins on some classic songs. While Glee can be a bit taxing and a bit cornball at times, at its core (the music) it is something I love. So once you eliminate the need for a storyline & plot, The Sing Off is the best parts of Glee in competition format.
The first episode was 2 hours and featured the 10 groups that made up the competition. 2 groups were eliminated on the first night. Unfortunately, one of the groups that was eliminated was Pitch Slap. That group featured my girlfriend Tara's cousin Christine and her classmates from the Berklee Music School. We found out last minute (the day of the show) that her group was in it, so we were eager to root for her. Unfortunately, it did not work out for them. Better luck next time guys. The groups are vastly different. There is a gospel group, a group of southern rockers, a group of 40 year accapella veterans, and even a high school glee club (duh... of course there is!!!). I am hooked, and I recommend it to all who are looking for some fun in the next couple of weeks. Tell me you ain't snapping your fingers and tapping your feet to these groups, and I'll tell you your lying!!!
Check out this clip with a bit of what you will have to look forward to. You can watch the first episode on NBC's website. Enjoy.

Email ThisBlogThis!Share to TwitterShare to FacebookShare to Pinterest
Labels: Glee, NBC, The Sing Off