A Christmas Letter From James West

Hey CCD readers... I made a mistake. Due to teh overwhelming amount of junkmail that I get in my gmail account (on top of Jeff Bond forwarding me millions of links!!!) I completely overlooked this cool open letter that our comic book correspondant James West submited for print last week. Better late then never... so here we go: 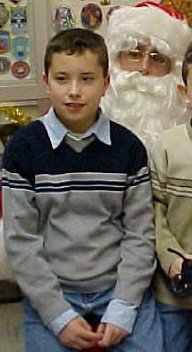 
Hello all, and Merry Christmas! This will be a departure from my normal comic book related soirées (Don’t worry, I know I used that word in the wrong context, but I liked how it sounded). I write to you now, dear readers, with the hope of purveying a message of good tidings of comfort and joy and all that stuff. Right now, I’m listening to “Somewhere in My Memory” by John Williams (aka the Home Alone theme song), and it’s making me a bit contemplative and reflective. I feel like every Christmas, I need to go through something or have some sort of revelation for it to mean something. This may be the product of years of Christmas specials, but I digress. Anyway, the one I came to this year was something a little more unorthodox. I mean, I already knew that the true meaning of Christmas is spending good times with loved ones, it’s better to give than to receive, and I’m raised Catholic so that’s all settled…but I still feel like I had something to learn. This year’s epiphany: I realized that, as a 19 year old college student…I still believe in Santa Claus.

Yup. I don’t lie to little kids when they ask me if he’s real. I’ve been there when my parents bought me my things, I’ve helped them buy for my siblings, and all that other stuff. But, for some reason, I still believe in Santa Claus, and I’m damn proud to admit it. I mean, I don’t believe that a guy squeezes down my chimney, comes out of my oven, and leaves me gifts. That would be preposterous (albeit, probably really awesome to see). The truth is, and I honestly believe this to be truth, that Francis Pharcellus (writer of the famous “Yes, Virginia” letter) was right: “He exists as certainly as love and generosity and devotion exist, and you know that they abound and give to your life its highest beauty and joy.” So there. Santa Claus is real, ladies and gentlemen. I don’t intend to top Pharcellus’ letter (is it possible?), and I don’t intend to sound overly dramatic or wishy-washy (probably will anyway), but couldn’t we use a little Santa Claus right now? Everybody’s divided. Politically, there’s constant in-fighting. In terms of religion…well, forget about it. We live in a world of falling economies and war-torn countries, starving children and failing faith. The world as it is breeds a race of cynics and pessimists, people with either no respect for anything or without enough belief in anything to form an opinion on it. Apathy and ridicule are held high in regard. Christmas is supposed to be a time of joy and cheer: instead, it has become viewed upon as a time of greed and commercialism. I say thee, nay. To someone standing in a mall, all day long, watching people scurry around apparently wasting their lives away buying things that people either do not want or need, then yes, Christmas could definitely be portrayed as a holiday based around some sort of agenda created by companies. But it really isn’t, is it? Because all those people running around, they’re the ones who, soon enough, will be sitting around a tree with their loved ones. And it won’t be about the gifts (although they sure make things fun…I mean, who wouldn’t want a giant new TV for free?). It’ll be about the family, the friends, and the good times. And that, to me, is Santa Claus. And this is something that’s non-denominational: I think it can really be celebrated by anybody of any religion or race. Hopefully I can make the cynics and pessimists and skeptics think that maybe, things aren’t that ugly after all. I intend to cause no controversy, as I think the things I’m saying don’t insult or offend, nor are they so hard to swallow. Jolly ol’ St. Nick is out there, somewhere, and I think that whenever we act upon what Christmas is about- what it’s really about- he’s there with us too, either by sleigh, chimney, or what have you. He’s the joy in the eyes of children when they see their presents, and the joy in the eyes of adults when they grow old enough to give to others. I’m not really concerned with what I get for Christmas anymore- well, that’s a lie, of course I am…but maybe, not the extent that I used to be. Right now, I’m most looking forward to sitting around the tree, my family, and the presents, and exchanging them- the experience of itself. I guess that’s the Santa Claus of it all…so naturally, the words ring true when I hear them- he’s definitely coming to town.