Vindication Will Scare Your Nose Off... Just Ask KMG!!!

Greetings from the Independent Underground! Since its All Horror Week here at CCD I thought I’d make a contribution to something I always had a great love affair with: Independent Horror! Specifically speaking I’d like to bring your attention to a fantastic little film called Vindication. But first a little back story….. 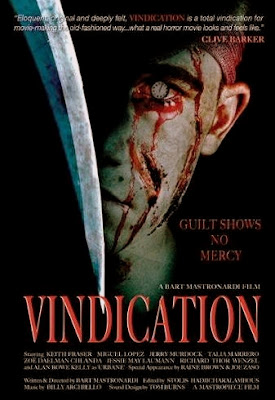 Back in 1999 just fresh out of high school, I was slave-working myself through three jobs, one of them being a CSR at Blockbuster Video in Howard Beach, Queens. It was there that I met my dear friend Bart Mastronardi. Since we both had a huge love for film (especially horror) we hit it off immediately. I knew at the time that I wanted to pursue film in college and lucky for me, Bart was around to give me some great advice and direction. Even though I was just a teenager and Bart was in his twenties, he always showed a great deal of respect & interest in my thoughts. He lent me books on filmmaking, showed me some of the short films he created and even took me to my first Chiller Theater Expo in NJ. Bart is truly one of a kind and I’m not sure if he’ll ever know how much his guidance was appreciated at the time.
After my little run at the local video store ended, we did lose touch for a while. But thanks to a social website called Myspace, I looked him up one day and we’ve been back in touch ever since. In fact, when I reached out to Bart at the time, he was in the middle of filming his very own first feature length horror film (which he wrote as well as directed) and invited me down to his set. So one hot & humid August morning, I went down to CW Post in Long Island and there was Bart hard at work with the rest of his extremely warm welcoming cast and crew. They were filming an important scene where the main character, Nicolas Bertram (played evocatively by Keith Fraser) slaughters a bunch of rave dancers at a masquerade party. Bart, in his wonderful mischievous sort of fashion, successfully convinced me to be one of the deaths in the scene. Minutes later I was in hair and make up (because yes, even the unfortunate dead girl needs her hair to look supafly n’ fine) getting my prosthetic smashed-in nose piece placed on by the wonderfully talented Henry Borriello and spewing out fountains of blood as assistant DP Dominick Sivilli caught it all on film. It was an experience I’ll never forget. And neither will my nose…. 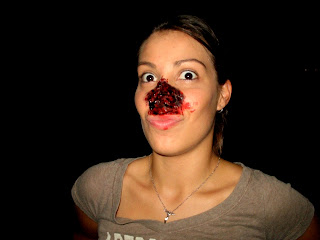 Vindication finally premiered in Forest Hills, Queens on December 13th, 2008. Since its release, the film has been featured several times in Fangoria, received personal praise from Hellraiser creator, Clive Barker and has racked up countless awards & nominations in festivals across the country, most recently this past weekend at the Terror Film Festival in Philadelphia. 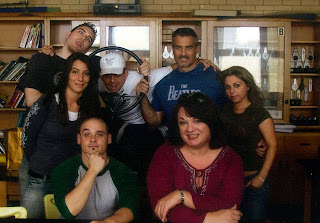 From its original story, to the blood sweat, heart and soul poured into it by every single person involved, Vindication is the epitome of Independent Filmmaking. In a time where we are force fed terrible remakes and lazy globs of horror shit at the theaters, films like Vindication offer you relief from all that. I suggest that any fan of horror should make it a point to see this ingenious piece of work and the best reward you can give to this awesomely talented bunch is to make sure you spread the word. Check out the film’s trailer below and for more information about Vindication, please visit http://www.vindicationmovie.com/ and click here to watch the full Vindication trailer in HD.

I found this cool little "making of..." featurette over on Youtube that gives you a one way ticket into the mind of director Bart Mastronardi and shows some great behind the scenes footage from Vindication. I have included it here. Great Job KMG!!!