My 3 Favorite Scary Movies Of All Time: Tommy Lombardozzi Edition

Ever since that scene in Scream where Ghostface asks Ms Barrymore that same question people have been asking each other it with regularity. Actually, I'm pretty sure they have been asking each other that since the beginning of film itself. Scary movies are just so easy to talk about... and so easy to form an opinion of. For many reasons they are the genre of movies that you can point to and say "Yup, these are the ones I LOVE!!!" In honor of CCD's 1st annual All Horror Week, we decided to highlight some of our contributors and friends 3 favorite scary/horror movies of all time. These may not be the best, but they are each person's FAVORITE, so these lists should be quite fun. Here we go!
Today we get a bit of insight into one of the most interesting people on the CCD staff, we get a peek into the twisted thought process of "Artin It Up's" Tommy Lombardozzi. When he is not prepping his rape kit (did I say rape kit... I meant date kit...oops!) and rocking out, he is creating wonderful works of art for your enjoyment. What three scary flicks does your boy Tommy love? Here we go:

Hey folks. Yes, it’s been awhile since I’ve done an article for C.C.D. All three of you may know me from my usual contribution to the blog called “Artin’ It Up”. Well, aside from a few video interviews I did at the Comic Con a few weeks ago, I have been absent from the site. I guess I needed some time to refuel and get some inspiration. Anyway…

As you can see, this is NOT an “Artin’ It Up” article (that’s coming later this week… with ALL NEW HALLOWEEN-THEMED ART!) Said art will have something to do with this article you’re reading right here! (You’ll see.)
So, for All-Horror Week here at the blizzog, Mr. Mike D. asked all of the Cultural Compulsive Disorder contributors for a list of their THREE FAVORITE SCARY MOVIES. Well…
I will not play armchair film critic. I won’t tell you much… or anything… about these films’ histories, how/why/if they changed cinema, I won’t critique form or outcome. Alls I’m gonna do is make a list of my four favorite horror flicks and tell you why I like ‘em. Each one has a bit of a history behind them, as far as how or why I discovered them, etc etc. Here it goes:
‘AN AMERICAN WEREWOLF IN LONDON’ 1981
Back in the summer of 1984, we went to the Jersey Shore to spend the weekend at a family friends’ house. They had a laser disc player. My brother and I got to choose one movie each to watch. He picked ‘Poltergeist’ and I picked ‘An American Werewolf… “. We’ll, we were scared shitless the whole weekend. ‘Poltergeist’ didn’t bother me, but ‘American Werewolf’ plagued me the whole entire time we were there. I could have sworn I saw a wolf roam the grounds outside the bedroom window! And worse than the wolf, what freaked me the most was those Nazi mutants who came to terrorize and murder the main character’s family as they watched ‘The Muppet Show’! BIZARRE!

Also, dead flesh! Griffin Dunne (who would go on to star in the classic ‘Johnny Dangerously’… and direct the not-so-classic crap-fest witch movie with Nicole Kidman and Sandra Bullock- I forget its name) played an ever-decomposing corpse throughout the movie!

Later in life, I’d learn to appreciate this movie on so many levels. (and not just because cute Brit Jenny Agutter shows off her cute tits.) As I became more and more into movies, I’d learn this film was directed by John Landis, who aside from directing Michael Jackson’s Thriller video, also did ‘The Blues Brothers’, ‘Trading Places’, ‘Coming To America’, and ‘Animal House’… among many others. There’s great practical make-up effects, good laughs, and an amazing climax. It remains one of my favorite movies in general… not just horror! 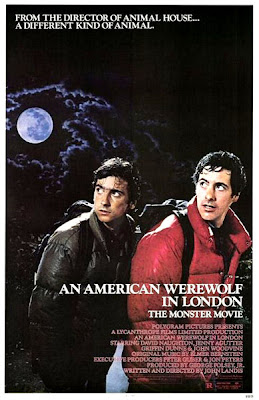 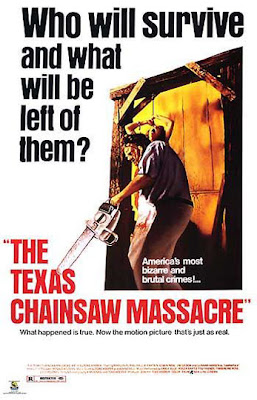 #2: ‘THE TEXAS CHAINSAW MASSACRE’ 1974
I did not grow up watching this movie. I had seen one of the crappy sequels when I was younger, but not the original. I saw this when I was a teenager, at the suggestion of my friend Glenn. It was truly sickening. The thing that gets me about this is that it pulls no punches. OK, aside from the fact that they try and hawk it off as a true story (which it isn’t, although it is based on the actual murders of Ed Gein… as is ‘Psycho’, another of my favorites), the manner in which this movie is filmed is so realistic and gritty that it seems like an actual home movie. That’s the 70s for you! Films of that era, especially low budget movies like this one, had such an air of reality about them; the way they look and sound, the non-scrubbed appearances of the actors, the film stock. It all really heightens the mood. And this creep-fest really holds up, in my opinion. Leatherface and his fucked-up family set the standard for human degradation in horror films. Real scum! If you watch the supplemental features on the DVD, you’ll get real insight as to the actual horrors the cast were put through by director Tobe Hooper (who would go on to direct another chiller favorite of mine, ‘Poltergeist’-though much has been said of that fact that that film’s producer, Steven Spielberg, actually directed a lot of that movie). It shows on screen, for sure. PS. I was trying to find that clip from ‘Summer School’ (1986) where Chainsaw and Dave give an oral review of this movie for class, but I had no luck. Sorry. 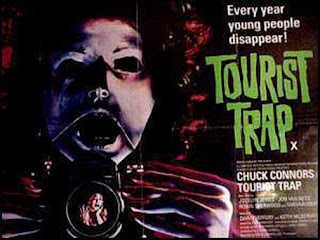 #3: ‘TOURIST TRAP’ 1979
Oh man, I love this dopey movie! Long story short, it’s a bout this creep-ass played by ex-TV western actor Chuck Connors who has telekinetic powers and runs a wax museum in the middle of nowhere. I don’t wanna give too much away, but, the movie also involves some lost teens (including hot-ass Tanya Roberts, who would go on to show off her fantastic tits in ‘BeastMaster’! as well as play the hot redhead’s mom on ‘That 70's Show... Ming!!!), a severed, screaming mannequin’s head, and people getting turned into man-dummies by the creep-faced Davey!
This was a WPIX channel 11 weekend staple in the ‘80s! My brother and I would watch it all the time with my mom, even though it’d freak us out. She’d goad us into watching it, even ; “Oooh, look what’s on!” Then afterwards she’d creep us out even further by doing the voices of the weirdo characters in the movie. Thanks, Mom. She got a kick out of doing this (same with ‘The Exorcist’… though I never heard her say “Your mother sucks cocks in hell!” or “Hey Jesus, fuck you!”) It is a fond memory though. When I found this on DVD back in 2001, I was really excited! It’s cheesy and low budget, but fun as hell. And, it really does have some creepy bits. Plus, it has Tanya Roberts in her 70’s tube top and hot pants. Nice.
﻿
﻿Well, them’s my three choices. It was hard to choose, as I had to omit some other favorites; notable mention goes to ‘The Exorcist’, ‘Poltergeist’, ‘Psycho’, ‘A Nightmare On Elm Street’ (1984), ‘The Howling’, ‘Silver Bullet’ (I was a big werewolf fan as a kid), ‘Wolf Creek’, plus these two that I wouldn’t consider among my favorites because they were just too sickening and disturbing to enjoy, even though they did leave a lasting, horrific impression: ‘Bloodsucking Freaks’, and, ‘I Spit On Your Grave’.
Posted by Mike D. at 9:37 AM