40 Years Of The Governator 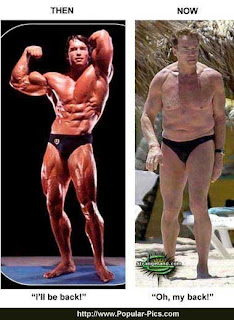 It's hard to believe, but actor Arnold Schwarzenegger has been blowin shit up on the big screen for 40 years... 40 F$#cking YEARS. Even though he has slowed down recently to act as govenor of the great state of California, he is planning to make a cameo in this years upcoming film The Expendables alongside other great 80's action stars like Sly Stallone and Bruce Willis. Somebody over at YouTube put together 160 of the greatest lines ever spoke on the silver screen by Sir Arnold, and after I watched this I had to share it with you guys. It's hard to admit it, but Arnold has made some great fucking movies. Commando, Predator, The Conan and Terminator Collections... wowsers!!! He has come a long way from Hercules In New York. And its hard to argue with the 1.6 billion dollars he has generated domestically... long live "The Governator" !!! Enjoy the clip.