BBQ Films & The Deets Family Need Your Help... Only You Can Stop The Wedding of Beetleguese & Lydia!

Anyone worth their weight in sandworms knows the Tim Burton classic film Beetlejuice back and forth... it is a classic 80s film that hardly anyone can find a negative word to say about. So when BBQ Films was looking for a film to be the next subject of one of their wildly interactive film screenings, it seemed like a no-brainer that this piece of celluloid perfection be the choice! After some brainstorming sessions over pizza and wine ( I was there... both were plentiful!) and careful planning, another exciting event is ready to go! These are the guys & gals who brought you the Back to the Future/Enchantment Under the Sea Dance, The Blade Blood Rave and American Psycho's own Patrick Bateman's 27th Bday Party... So what will it be this time? Well.... they desperately need your help to STOP the nuptials of a nasty denizen of netherworld and a confused Gothic teenager! Check out the details after the jump... 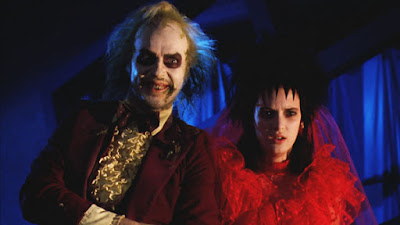 On Saturday March 19th and Sunday March 20th BBQ Films is inviting you (actually pleading with you!) to come on down to the House of Yes in Brooklyn, NY to stop the nuptials of Beetleguese & the lovely Lydia Deets. There will be a full on screening of the film, interactive actors and actresses bringing the film to life, and will be accompanied by all types of Beetlejuice themed shenanigans as only the crew of BBQ Films can bring! There will be an undead photo booth, a limited edition film poster, gourmet popcorn, and even a chance for members of the wedding party (the VIP ticket holders) to be married by the monstrous wedding officiant themselves!!! There will be awesome sets and scenery recreating all of the familiar images from Burton's awesomely visual film, and refreshments that will channel the best memories we have of the Ghost with the Most! 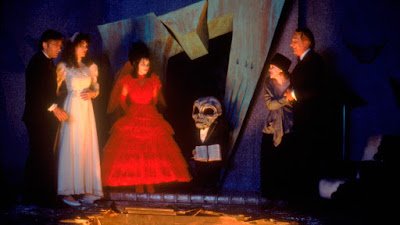 You can buy your tickets here... but you better hurry, because these events sell out fast! You can also get some awesome background information on the BBQ Film crew by checking out their interactive website. Click here to see all the pics and press from the past events if you need any motivation to make your purchase, but my guess is that you are as psyched as me and will be grabbing them up ASAP!

You will see the CCD.NYC fam in the house, and we will have some cool collaborations with BBQ Films in the future... so come on down and lets stop this wedding!
Posted by Mike D. at 12:36 AM