Another One Gone To Soon... R.I.P. Sean Price aka Ruck of Heltah Skeltah

Boot Camp Cliq member, Heltah Skeltah partner, Fab Five starter, and rapper extraordinaire Sean Price aka Ruck has passed away at age 43. Damn, a piece of my teen age years is gone... way to soon. Man.... this hurts more than most. I was a huge Boot Camp Cliq supporter in the mid to late 90s, and out of everybody I gotta say that Price was my favorite of the large extended rap family. Why? because he was clearly the best of the bunch aside from Buckshot himself. And it wasn't even close. God, why you gotta take this great of a rapper when there are so many trash rappers out there?

My man Ruck was one of the wittiest rappers I have ever heard... the man had punchlines for days. But he also could get real deep with his lyrics (see him on Therapy... one of the dopest Boot camp songs ever off of any of the crews albums) as well. Leflaur Leflah Eskoshka was the best song of my junior year of High School at South Broward High in Hollywood, Florida. Without a doubt it was a flawless single. And when the Nocturnal album dropped, I was hooked. Therapy, Operation: Lockdown, The Square, Who Dat?, and so many more... just gems. Then they came out with their second album, Magnum Force. I do enjoy it... but it is nothing compared to Nocturnal. One track that stands out is "I Ain't Havin' That", a song which samples A Tribe Called Quest and Redman and uses them perfectly. I love that song.

After that, the duo kind of went their separate ways... but Price stayed loyal to the BCC and released a few dope solo records. My favorite was definitely "Monkey Barz", which really allowed Price to get in on every track in a way that he hadn't been able to do before since he was always collaborating with some one or some group. So in honor of the boy Ruck, here are MY PERSONAL FAVES of his. Enjoy his lyrics, enjoy his crazy ass in his videos, and enjoy the fact that even though it was a short period of time we got to enjoy one hell of a talented rapper!

"Sean sparks, like John Starks in the 4th quarter. Ought meet my peeps, deep like the Torah. Unforgettable like Nat King, bats swing, Louisville chill, because my motherfucking slap stings. This track brings the average career to a halt... is it my fault you fell victim to my verbal assault. If I had dollars for every nigga who dared to battle me on microphones, I'd fuck around and be a millionaire"
RIP Ruck...

I Ain't Havin' That:


Boot Camp MFC Eastern Conference (his verse is around the 2:55 mark):

I thought this was real cool. Sean price with his daughter at the annual Duck Down BBQ in Bushwick. Pretty dope if you ask me: 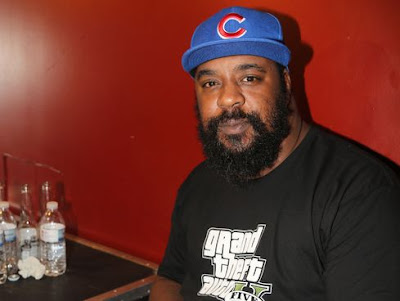