Kevin Smith's 'Tusk' Gets A Poster.... Yup, It Is Just As Weird As The Premise For This Movie!!!

Anyone that knows me knows that Kevin Smith is one of my favorite directors of all time. The guy can do no wrong in my book. Hell, I even really like Jersey Girl (Affleck was more of the bomb in this than Phantoms yo... hehehe). I was very disheartened a bunch of years back when smith announced that after filming Cop Out he was pretty down on filmmaking and was contemplating retirement from the movie business as a whole in favor of his newest interest, podcasting. After all, he was tired of the studio grind, tired of dick head actors (he hated working with Bruce Willis on Cop Out) thinking they were better than the writer/director, and really loved the freedom podcasting allowed him. But a funny thing happen on the walk away from behind the camera into the podcasting booth... he ended up becoming inspired to work on new, creative endeavors in filmmaking from topics brought up on his many Smodcasts! He immediately began work on Tusk (a crazy film which you can see the description of after the jump) as well as numerous other projects, and his retirement has been put on hold for a bit. The fruition of his "renaissance" period is about to begin with the release of the trailer for Tusk (which will be launched at SD Comic Con 2014 at Smith's annual pannel) in a few weeks, and we are getting a glimpse into the dark world of Tusk with the first poster... released today via the Internet (typical Kev being Kev). The guy knows how to use the 'Net to his advantage, that is for sure. Tusk opens sometime this fall. Check out the film synopsis & poster for Tusk after the jump...


When podcaster and journalist Wallace Bryton goes missing in the backwoods of Manitoba while interviewing a mysterious seafarer named Mr. Howe, his best friend and girlfriend team with an ex-cop to look for him. 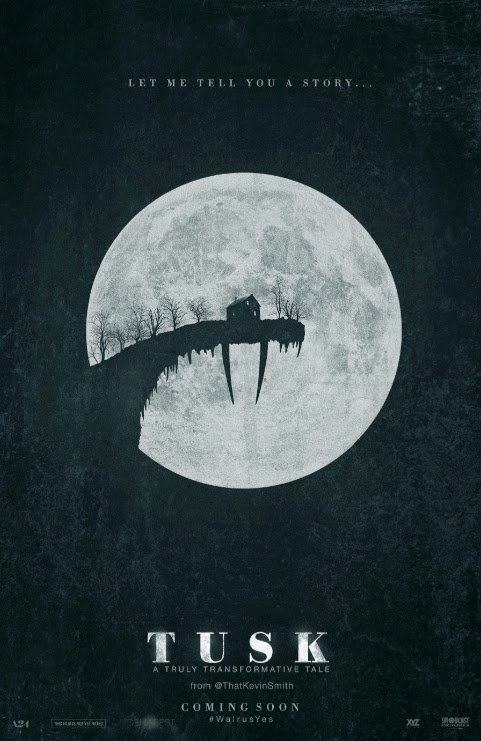