A CCD Rant by Joe Esq: Am I The Only Nerd Who Gets Annoyed...

... When they change stuff in the comic book to make it match the movies? Ok look, I understand the corporate robot-think that leads to comic book companies doing this, but I find it contemptible and I'll never agree with it. And that's not just nerd-rage talking, the way I see it, its a really shortsighted and stupid thing to do.
Ostensibly, the (flawed) logic behind this practice boils down to this: more people see the movies than read the books. Some of those people MIGHT see the movie and be curious enough to start reading the books too. So, lets make the books look as much like the movies as possible so that when (if) these potential new readers come along, they're not immediately alienated by things being different than they're used to.  To me, this just reeks of desperate pandering and, if you think about it, its actually insulting not only to the people who were already comic fans, but to these potential new readers as well.

Basically, this practice demonstrates that the publishers' (despite seemingly being desperate for their business) have an underlying belief that these non-comic book reading movie-goers are a bunch of morons. Seriously, "the comic is a little different" or "they changed that for the movie" are concepts any 10-year-old can understand. Why the conceptual red carpet needs to be rolled out for a bunch of people who are only potentially reading the books is beyond me. Is "the X-Men wear blue and yellow costumes in the comic books" really too high-concept for the average non-comic reading movie-goer to grasp? Are the publishers that insecure that the stories and art aren't good enough to sell themselves on their own merits? If  someone is curious enough buy a comic book, the fact that something is different isn't going to make or break their decision to keep buying. Have some self-esteem!

Because, while you're busy pandering to people who aren't buying your product yet, the worse effect of this is that it inevitably alienates the loyal readers YOU ALREADY HAVE!. You know, the ones who are already regularly shelling out 3 bucks an issue, week after week, all these years? The ones whose loyalty was a large part of the reason these characters (and the whole medium) have enjoyed the longevity that made movies about them a viable option in the first? No? Not ringing any bells? Oh, right, screw them. They're hooked, and you're already getting their money.

For me, and I'm sure I'm not alone, every time there's a change in a book I'm reading to match something from the movies, its jarring. And annoying. Sometimes its just a cosmetic change, but other times the storylines have to do gymnastics in order to get things to line up. Either way, it's like a metaphorical record scratch right across the page of the comic. Below, I have a few of the most egregious, off the top of my head examples, but before I give you those, I just want to sum up. Comic Book Publishers, STOP DOING THIS! You're alienating people who already pay you money in order to pander to people who don't. Let them join the club, stop trying to change the club while begging them to join!
In case you're lost, here's some examples of what I mean: 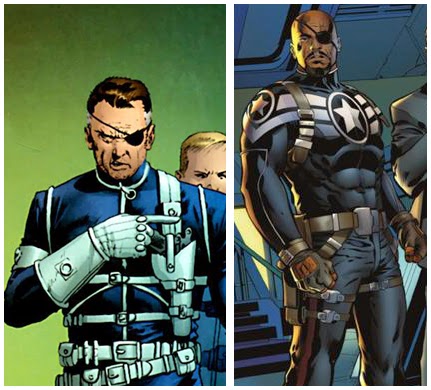 Ok, so in the Marvel Ultimate Universe, the design of Nick Fury was based on Samuel L. Jackson. Then they make the Marvel movies and cast Sam Jackson as Fury... which somehow leads to a convoluted story where the Nick Fury in the main (616) Marvel Universe is a black guy that looks like Sam Jackson. Ohh, he's Nick Fury JUNIOR? Yeah, that makes it better.
2. Mystique is a blue lizard: 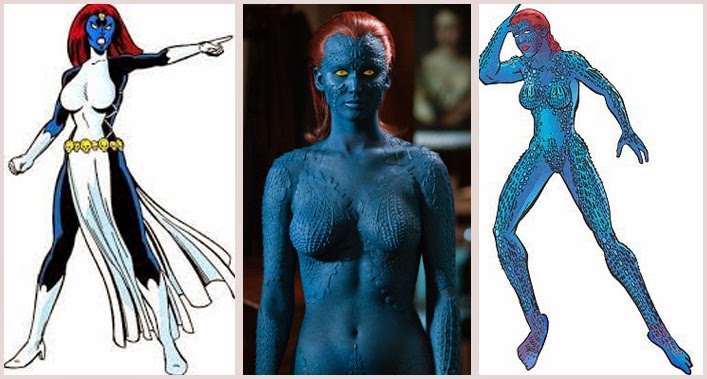 Now, objectively this one could be called an improvement. In the comics, Toad was a short fat dude whose power was he could jump real high. In the movie he's a skinny, athletic guy who could jump real high, knows parkour and has 25 foot long prehensile tongue. So of course, again in the 2001 X-Men Forever mini (which may as well have been called X-Men: PLEASE BUY US AND LIKE US BECAUSE YOU SAW THE MOVIE) convoluted measures are taken to make Toad green, skinny, have a 25-foot tongue, adhesive saliva, and pheromone powers (because there's a rule that every non-main character mutant in the X-Men movie universe must have 47 powers). So sure, while the new movie-inspired Toad is "cooler" than the old Toad, it still feels like unneccesary pandering to me.

I didn't feel like doing photo research for this one. You all know what I mean. They looked shitty in the movie, they look even shittier in the comic. Thankfully, I think they've already stopped drawing them that way. 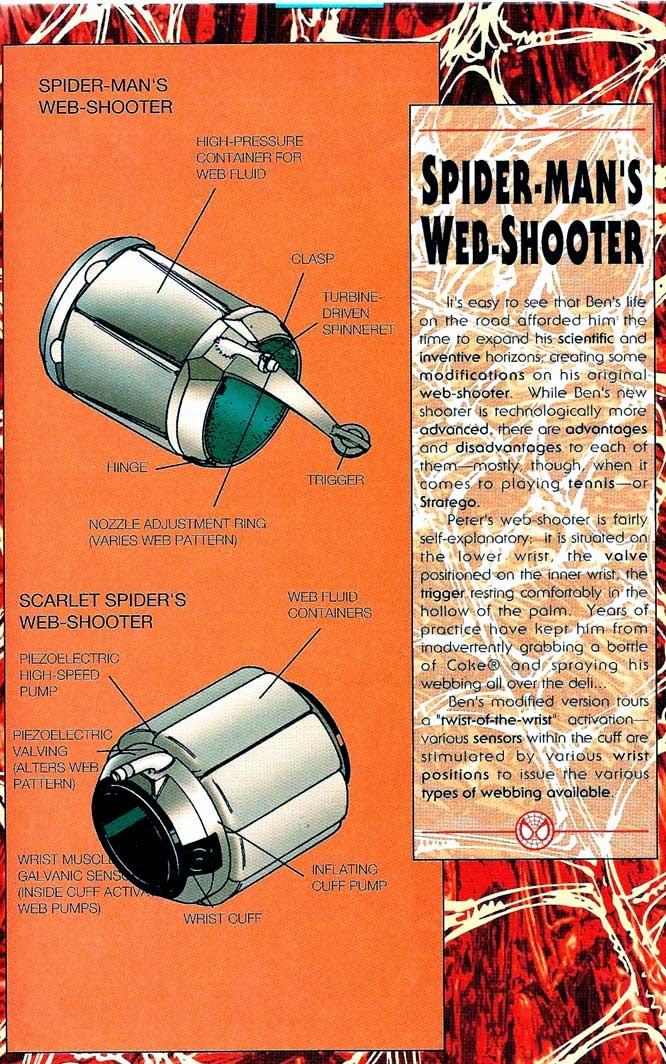 So, to match the way it was in the movies (and because Peter having biological webbing is more "realistic" than him having invented a webbing and shooters to go along with his other powers), Marvel made Peter develop organic web shooters in the comic. Yeah that's a great idea, take an integral part of classic comic book Americana and discard it so some movie jerk won't feel too alienated by it... on the off chance that that movie jerk actually picks up the comic in the first place. The comic storyline involved Spidey being turned into an actual giant spider and then back. Can we just acknowledge that Spider-Man spraying sticky organic fluid all over his enemies, and the city, is gross? Thankfully, the spinnerettes coincidentally developed in his wrists, instead of his rear end, like a real spider. This mutation of his powers has been ignored since the "Brand New Day" storyline (which I will not discuss here, because its a whole other can of nerd-rage), and Peter is back to using his man-made webbing.

So that's five of the worst. There's more. Hawkeye's costume; the aforementioned cladding of the X-Men in all leather; Coulson suddenly showing up everywhere; I could go on and on. I guess we should just be thankful that there's an even longer list of stuff that was changed for the movies that the comic books have left intact (Deadpool anyone?).