Another Stephen King Story Is Getting The Small Screen Adaption This Summer... 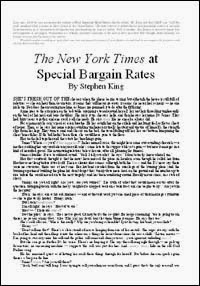 I have never made any apologizes for my total allegiance to Stephen King... the man has made my childhood and early adult life wonderful with his writing, and whether you like his works or not it is hard to deny his success. Most people know him for his horror work... I get it, it makes up the majority of his work that people know. But the dude has so many other genres of writing that he has touched on it blows my mind. He is truly the quintessential American writer of the last 40 years, and my reasoning for that is just the sheer body of work he has created and how far reaching his stuff has grown. King has had his fair share of works adapted for film or TV... mostly horror projects (The Shining, Carrie, Salem's Lot, The Dead Zone, Etc), but also a lot of mainstream subject books (The Shawshank Redemption, Stand By Me, Under The Dome, etc) have been adapted as well. Some have been great, some have been awful... but in this current state of TV (with the short order summer TV series dominating the market) it is ripe for some of King's works to shine. Under the Dome was one of the biggest hits of last summer (amazing TV...) and The Following was also a big fan fave last year (not one of King's works, but in the same vein), so ABC is trying to catch lightening in a bottle again, adapting King's short story 'The NY Times At A Special Bargain Rate' for a summer series in 2014. Check after the jump for more details...

King's short story 'The NY Times At A Special Bargain Rate' will be called Grand Central when it airs on ABC, and will be a 12 episode, short season summer series that provides viewers with something new to watch while their traditional network shows are on summer hiatus. Under the Dome was pretty great, and the way they did it was with a solid original work (thanks Stevie!) and a great cast. I am sure ABC will take a good hard look at what CBS did with UTD and look to do the same. Here is a synopsis of the original story:

A widow answers a phone call from her husband who died two days earlier in an airplane crash. He is presumably in an afterlife. The husband predicts two tragedies which later came true and helps his wife avoid death herself.

Sounds good to me... I will be tuned in this summer. Now it's time to knock out King's newest book Dr. Sleep (the sequel to The Shining) over the Christmas holiday! It's a King Christmas in the CCD Blog household!!!
Posted by Mike D. at 2:01 PM