This story is just driving me crazy. And just another reason for normal people to hate a pretentious movie star who thinks he can fulfill certain obligations to get a check and then he doesn't have to come through on the rest. In this case, we have actor Jim Carrey being offered a killer supporting role in the movie Kick Ass 2. Carrey is playing Captain Stars & Stripes, an amalgamation of two very important characters from the original comic. He is the de-facto leader of Justice Forever, the team of heroes that Kick Ass & Hit Girl join to battle The Red Mist (now known as The Mother Fucker) and his team of villains, The Toxic Mega Cunts. Yup, I just wrote that sentence... The Toxic Mega Cunts. Mark Millar's comic world of Kick Ass has always been blood drenched and violent, and things like rape and murder are very present in every aspect of the story. So what the fuck did Jim Carrey actually think he was signing up for? Check out more of my outrage after the jump...

So this is the original comic character that Carrey was set to play: 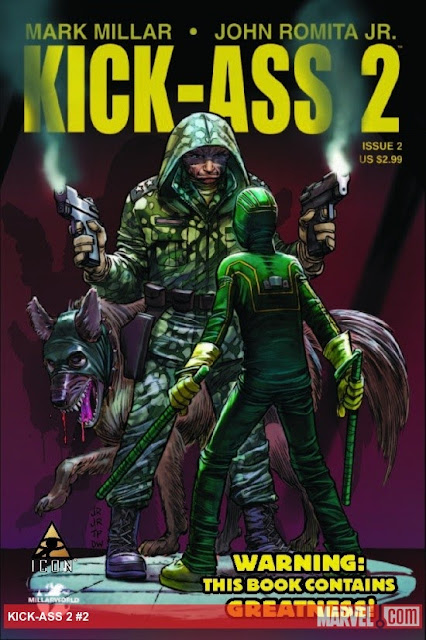 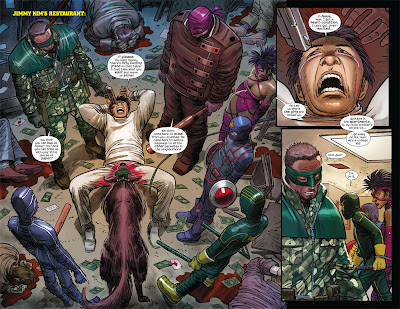 Yup... that about sums it up. Carrey is playing a masked vigilante that carries multiple guns, a patriotic painted axe handle on his waistband, and has a humongous pet German Shepard that is a vicious attack dog. Yup, that is Captain Stars & Stripes in a nutshell. Is he a good guy? No question about it... dude is a reformed mobster who wants to do nothing more with his life than hurt and punish bad guys. But will he be ultra violent in doing so? ABSOLUTELY!!!!!

So what the fuck is Carrey talking about here: 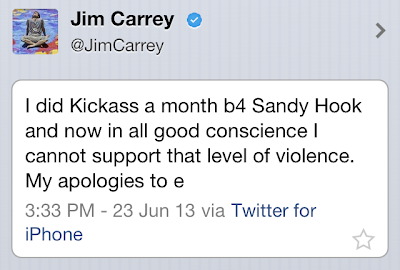 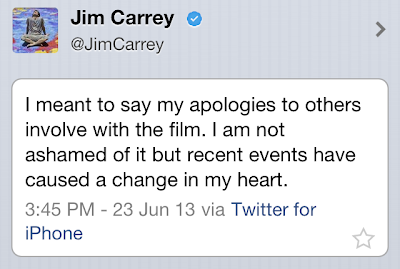 This just doesn't make any sense. Don't get me wrong, Sandy Hook was pretty terrible. No one is debating that. But the comic came out in Oct of 2010, and Carrey signed on for that check and filmed it a month before Sandy Hook took place. It was violent and terrible from creation, yet Carrey had no problem with doing it at all. There were plenty of awful things that happened BEFORE Sandy Hook that could have made Carrey have a conscious and not do the movie... yet he still did it! Filmed for months, cashed the checks, and yucked it up as one of the more prominent characters in the early released footage. He seemed to be doing the part justice... so wtf?

These are a few pics of Carrey in the movie: 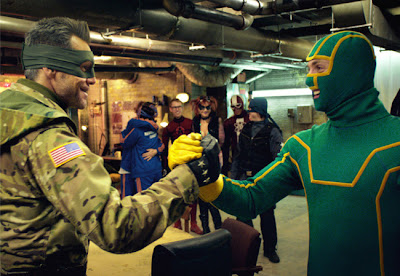 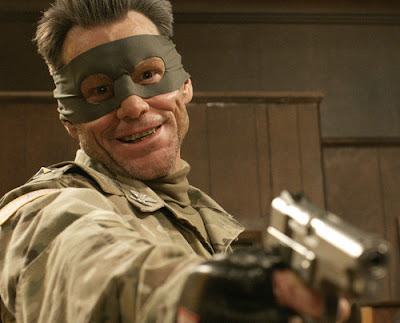 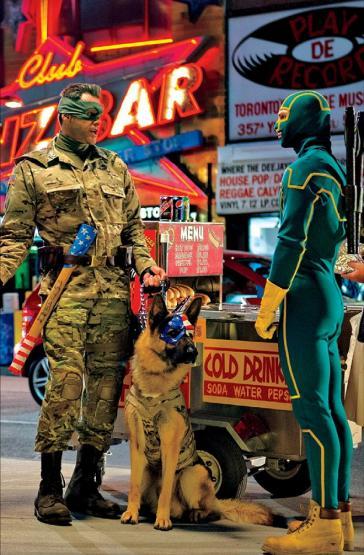 He doesn't look so concerned with the violent appearance/nature of his character, right? So now the movie is coming out, and he doesn't want to make the rounds to promote it. He is leaving the heavy lifting to young stars like Aaron Johnson & Chloe Moretz, when his star cred could do a lot to promote the film and help it do better at the box office. This had Moretz, who is wise beyond her years and been working in movies for years, as perplexed as me:

“It’s a movie. If you are going to believe and be affected by an action film, you shouldn’t go to see ‘Pocahontas’ because you are going to think you are a Disney princess,” the 16-year-old Moretz told the U.K.’s Sun.

“If you are that easily swayed, you might see ‘The Silence of the Lambs’ and think you are a serial killer. It’s a movie and it’s fake, and I’ve known that since I was a kid … I don’t want to run around trying to kill people and cuss. If anything, these movies teach you what not to do.” (Via The Wrap)

This comes from a 16 YEAR OLD. A 16 YEAR OLD!!!! She gets it... its a movie. WTF Jim? Do you think anybody will possibly confuse a movie starring a villain named The Mother Fucker as real life tragedy like Sandy Hook? I doubt it. And another thing... what the fuck does a battle royal between two groups, however violent it gets, have anything to do with a crazy person shooting up a school? It is not like that is emulated in the film... or even close to the type of violence that appears in Kick Ass 2. Is there rape, murder, and torture galore??? Sure... but there was in Burt Wonderstone too. You sliced open your own cheek and pulled out a folded up, blood covered card after having an audience member punch you in the face. But that violence was ok, right? You are a DICK Jim Carrey.... 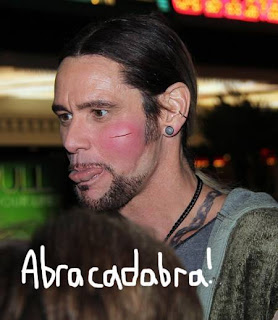 Finally, here is a solution. If you were that moved by the events of Sandy Hook, donate your salary from Kick Ass 2 to the victims. Or a portion of it. You are already rich as fuck. Donate the money from the movie that you made... but don't submarine the film by not promoting it. The younger crew like Chloe & Aaron need the film to do well, and the fans of the comics want it to do well so that we keep getting more films like it adapted to the big screen. His lack of promotion for the film could derail the whole success of the film. Don't be a douche Jim.... no one forced you to play this guy: 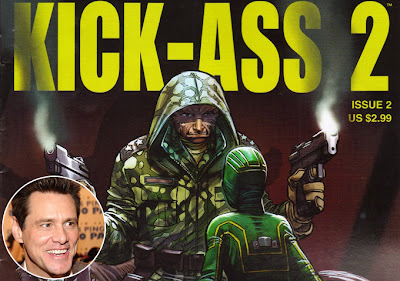 Fuck YOU Jim Carrey. You are a douche nugget!
Posted by Mike D. at 2:23 PM