I have always had an appreciation of Walt Simonson as a comic creator. I love his artistic ability, and he is one of the rare gems that is also an excellent writer and storyteller to go along with his cool ass graphics. Plus the guy may  very well be the most personable man I have ever met... he was so down to earth and cool, very matter of fact and even self deprecating with his 'I'm no big deal' attitude. The guy is a titan. He is also one of the coolest guys to follow on Facebook, because he posts a ton of gems for fans like me. Today he posted this wonderful print ad for the X-Men/Teen Titans (Simonson calls the book X-Titans) from 1982, and I really love it. The two company crossover was written by Chris Claremont, and the art came from Simonson and Terry Austin. I also like the play on Francis Ford Coppola's 'Apocalypse Now' movie title in the ad. Check out Simonson's Facebook for more gems like this on a daily basis (he also puts up tons of old panels) and check out the black and white ad in full size after the jump... 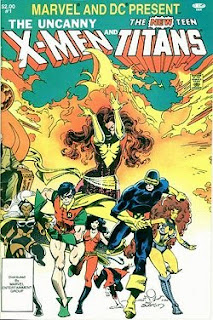 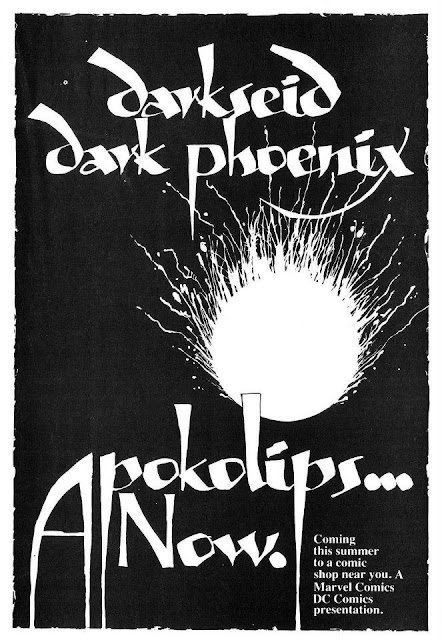 Here is what Simonson had to say about the ad:

A print ad for the X-Titans books I penciled back in the early 80s. Haven't seen it in years. Ferran Delgado posted it over on the Appreciation page. I am virtually certain (which is to say that there's about a billionth of a percent of questionable memory here) that I drew it. No idea what became of the original.The lettering was inspired by the work of a calligrapher who had a couple of books of his examples published back then--might have been from Dover books although I'm not certain of that. Probably still have the books around somewhere, and if I find them, I'll add his name here in the credit where credit is due dept. I thought it was pretty cool ad. Don't know if it would fly now. ;-)
Posted by Mike D. at 1:36 PM