A CCD Rant - Cloud Atlas: What Did Mike D Think?

Last night Jeff Bond and I decided that we needed to make a trip to the local cinema and catch Cloud Atlas on the big screen before it leaves theaters. The film has been in theaters since October 26th and is much debated on the merit of its three hour runtime. This is a full on fucking movie, one that does not take any shorts from what the filmmakers (the Wachowski Brothers & Tom Tykwer) wanted to get up on the screen. It is adapted from a very famous British book of the same name by David Mitchell and has been pretty much a nightmare to get an actual release. It features a star studded cast with the likes of Tom Hanks, Halle Berry, Hugh Grant, Jim Broadbent, Susan Sarandon, Keith David, Hugo Weaving and Jim Sturgess... all who appear in various roles throughout the films six segments. The film has been praised by some critics like Roger Ebert as visionary and extremely fun, and panned by reputable publications like Time Magazine as one of the worst movies of the year. It can't possibly be both, right? So here is my little rant on what I think of Cloud Atlas. Here is a bit of a hint: I tend to think Ebert is right in this one...

Let me start off by saying that I absolutely love the Wachowski Brothers as film makers. But I am not a Wachowski fanboy who will automatically defend everything they do, even if it sucks. The reason why I hold them in such high regard is because they have taken the success & credibility they had with the first Matrix film and then used that cred to make the films THEY wanted to make. Their way. the wachowski vision. You may not like the two Matrix sequels or think that Speed Racer was anything more then CGI drivel. You may agree with Alan Moore when he calls V for Vendetta a travesty. And you may think Time has Cloud Atlas pegged spot on. But their is one thing you have to agree, and that is the fact that the Wachowski's don't give a flying fuck about what you think when it comes to their creative process. And they will make the films they want to make, when they want to make them, how they want to make them. You gotta love them for that. 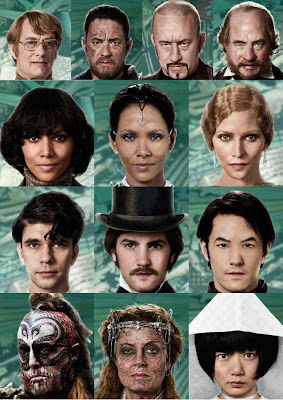 Great, now that we got that out of the way, lets talk about Cloud Atlas. This fucking movie is huge... and I mean huge. 3 hours long? Check. 6 alternating story lines that span hundreds of years? Check. An epic assemble cast that would make the producers of New Years Eve cry in shame for not being able to secure such a talented cast? Yup... it's all here. Not to mention the fact that we get a little bit of every genre of film mixed into this flick  from period seafaring adventure movies to Matrix styled science fiction. Huge is the only way to describe it. And it is epic. And I kinda loved every second of it. All 2 hours and 52 minutes of those seconds. My number one reason for this has to be because, for every moment of the film's running time you can see that whether you like the film or not, the Wachowski's made the film they wanted to make. It is an uncompromising vision... and that makes it fantastic. Fucking fantastic... and that originality and clarity in seeking out their vision is what makes this film so important. Cause that type of film does not get made very often in Hollywood... not now, not ever for that matter.

As far as the story lines themselves, I have to admit that I liked them all for various reasons. My favorite was probably 'The Ghastly Ordeal of Timothy Cavendish' and 'Half Lives: The First Luisa Rey Mystery'. I think I like these two segments the best because they contrast each other so well.  The first one is the funniest of the bunch and is set in modern times. Jim Broadbent is fantastic as a hapless publisher with no luck and Tom Hanks as a ex con writer who tests out the theory of gravity on one of his harshest critics. I loved this segment across the board, and that is what makes the Luisa Rey segment so cool as well.

Halle Berry takes the lead role in this segment which is set in 1973 and uses the nuclear power craze as a backdrop for the mystery. It plays like a hard boiled 70s exploitation detective story (like the French connection or Cleopatra Jones) with some of the best characters of the movie. Hugo Weaving stands out as assassin Bill Smoke, and Keith David proves once again that he is the motherfucking man. These two story lines play so opposite each other that they make for great favorite segments and provide me with enough reasons to like the movie themselves.

My least favorite segment had to be the Neo Seoul segment, which was the one set in the future and had the most sci fi elements to it. You would think that this would be the Wachowski's strong suit since they seem to love the sci fi genre so much, but it is pretty much a rip off of all the classic sci fi movies I saw from the 70s and the 80s. Replicant humans like Blade Runner, government control like 1984, blind consumerism like Soylent Green, an innocent hero/heroine on the run like The Running Man, and an impromtu hero/heroine that needs a little push to see the realities thate xist in their world and become the leader for change like in Star Wars... it's all there, right by the numbers. some of the tech was cool and some of the visuals were fantastic, but it mostly lacked originality and left me pretty board. But other than this segment I really didn't have too much to complain about.

In the interest of not ruining the movie by talking about key points of the film I will say that the reason I liked the film so much is because of how original it is and what that takes for a filmmaker to undertake. It is so rare to get a film maker to take chances on material they love and make the film adaption that they envision, and the Wachoswski's & Tykwer do just that. They make an uncompromising version of what they want to make... and like it or not, in this day and age of paint by numbers movies you just do not see that much anymore. It reminds me of Kubrick changing around The Shining and basically telling a young Stephen King to go fuck himself when the writer question some of these changes on the set of the film. The writer may know the vision of the novel best, but translating that to the big screen is totally different. That is up to a director, and when anybody takes on something as large and dense as a book like Cloud Atlas then you need a true visionary to get the job done. Or maybe three visionaries. 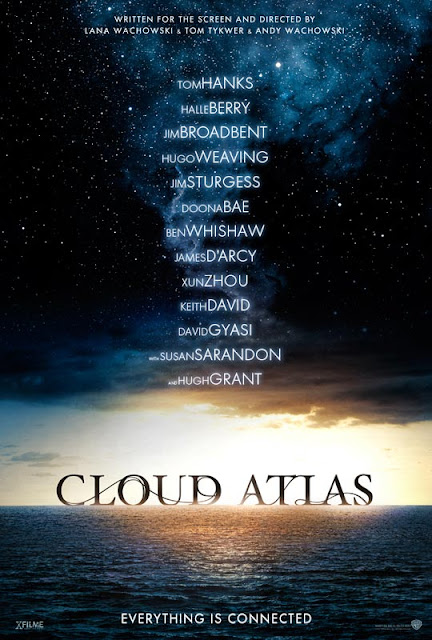 Either way, I think you will enjoy Cloud Atlas for this reason alone. But what the fuck do I know? Films like Alvin and the Chimpmunks & Jack and Jill make hundreds of millions of dollars yet original movies like Cloud Atlas get blasted as too complicated and unique. It is the sad state of affairs in Hollywood these days, but as long as the Wachowski's keep getting projects financed then at least we will get to see some creativity and conviction in a few films. Get out there and see it before it is out of theaters, because this is the type of film you definitely want to see in the cinema. Please leave your own comments and thoughts on the movie below... I would love to hear what you guys have to say!!!!
Posted by Mike D. at 12:25 PM