A Blast From The Past: Clive Barker's Nightbreed - Does It Hold Up?

I was over at my favorite horror blog, Freddy In Space, catching up with my man Johnny's musings when I came a cross a post for a long lost intro video that Clive Barker made for the VHS edition of Nightbreed. This particular article jumped out at me for two reasons: 1) Nightbreed is one of my favorite childhood movies and  I must have seen it 1,000 times between the age of 11 & 15 in the good ole days of VHS rentals from the Mom & Pop video shop... and have not seen it again since! 2) I am in utter shock & awe that Johnny, Mr. Horror Blogger Extraordinaire, has NOT SEEN THIS HORROR CLASSIC!!! Both of these are travesties that I hope are remedied shortly. I am hoping that somebody (ANYBODY) picks me up the Nightbreed DVD on Amazon for 13.99 that I have put on my Christmas List, and I have made a personal plea for Johnny to watch the movie and join the cult of Midian. Lets hope both get done before Christmas. But since I have not seen the film in at least 15 years and I think I will be acquiring it soon, I will have to re-watch it and see if it holds up... 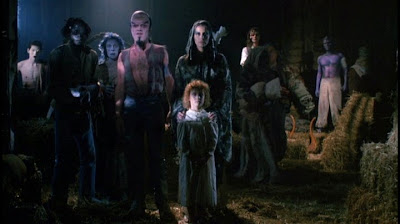 For those of you who do not know what Nightbreed is all about, here is what all the fuss is all about (click here for the Wikipedia page) . The film came out in 1990 , was directed by Clive Barker, and is an adaption of his book Cabal. It features Craig Schafer & David Cronenberg and is a very cool monster/slasher movie hybrid. Barker is not one of the greatest film directors of all time, but he is certainly one of the best horror authors of all time... and Cabal is one of his best short stories. The monsters of the lost city of Midian are not really well described in the story, so it is super cool to see what director Barker decided they looked like once it was time for him to film the movie. And I love Cronenberg when he steps in front of the camera, cause he is super fucking creepy.

Here is a cool video clip that was shot for the VHS release of the film. It features Barker providing some insight behind why he wanted to make the film and what he hopes the viewer takes from it. It is another great find from my boy Johnny... his site is really fantastic when it comes to unique horror posts, so check it out by clicking here. Enjoy the video:

Check back shortly after I get the DVD and re-watch the flick to see if it holds up to what I remember it to be. Also, check out the Occupy Meridian homepage. This is the main page for the newly finished Nightbreed: The Cabal Cut version of the film... which is an extended cut of the movie that features almost one hour of cut footage in it and gives a much better idea of what Barker intended for his adaption. It screens all around the world (upcoming screenings in France & England) and at various horror conventions around the country. I hope that one day I can view this awesome version of the film myself. Extended cut blu ray anyone????? 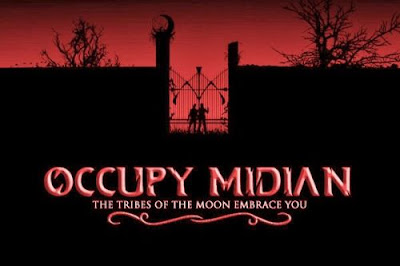