'Raiders Of The Lost Ark' Is Coming To Imax & Blu-Ray... Will It Be Worth The Trip?

I am a bit late to the game when it comes to Imax. I saw some early movies in Imax (Batman Begins, Transformers, etc) and then didn't go back to the Imax format again for awhile. That all changed with my trip to see The Dark Knight Rises in all its Imaxed glory. While the film looked wonderful and sounded amazing, I have to be honest when I say that I was turned off by one specific problem: The Price. The tickets here in NYC cost $22 dollars for an Imax film, whether its a matinee show or a show after 5. That is super expensive, and not including the surcharge that would be added if the film was 3-D. That would be at least 5 bucks more. That is a lot of money to see a film, especially when I can buy and own a Blu-Ray for under 15 bucks and watch it more than once on my high def TV at home. I said that if I ever go to see a Imax film again, it would have to be something special. Well, I didn't think it would be so soon, but it looks like I will be there at an Imax screen this September. Raiders of the Lost Ark has gone through the conversion process and will be appearing on Imax screens for one week from September 7-13th! Steven Spielberg is raving about how great his original film looks and I am excited to see one of my favorite movies of all time looking sharp and sounding wonderful. The full Indy set also comes out on Blu-Ray, and to celebrate that AMC will be having a marathon of all four films (not in Imax, just regular) on September 15th! Get over to the Imax or AMC Theater website (or wherever you buy movie tickets online) and reserve yours now. You can see the trailer after then jump...


Here is the movie poster: 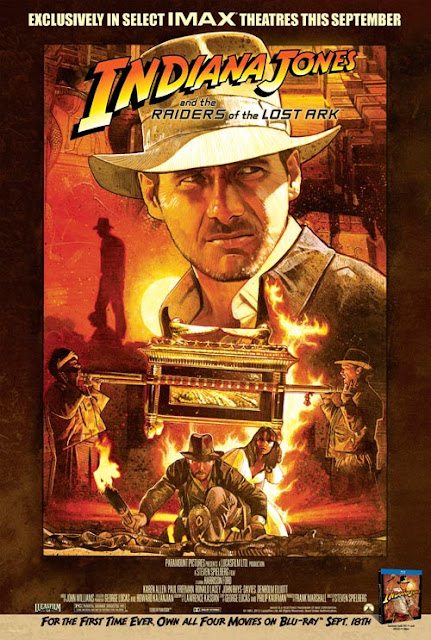