League of Extraordinary Gentlepersons 1996 by The Mighty God Kings

Alan Moore's League of Extraordinary Gentleman is an interesting oxymoron. The stories themselves are based on literary characters of the past that have hit public domain (people like Alan Quartermain, Captain Nemo, Mr. Hyde, etc) and have been re-purposed by Moore into new modern adventures. What makes this an oxymoron is that Moore is constantly bashing DC Comics (the company that owns the rights to most of his earlier works like Watchmen & V for Vendetta) for using his characters in ways that he would never use them. I wonder if H. Rider Haggard, H.G. Wells, and Robert Lewis Stevenson would approve of Moore's version of their classic characters. But I digress... The guys over at Mighty God King have decided to show us what a future inclination of the League might look like if the team was formed in 1996. The story would revolve around Edward Scissorhands, Nancy from The Craft, Tequila Yeun, Dana Scully, Zack Morris, and Rufus from Bill & Ted's excellent Adventure. I also love the potraits of past team members from the 80s/90s. Sledge Hammer? Max Hedrom? Yup, I would read the shit out of this book and not give two fucks what the original creators of these characters think about it. Great piece of art. Check out the guys wonderful website here and click after the jump for a full size version of the piece... 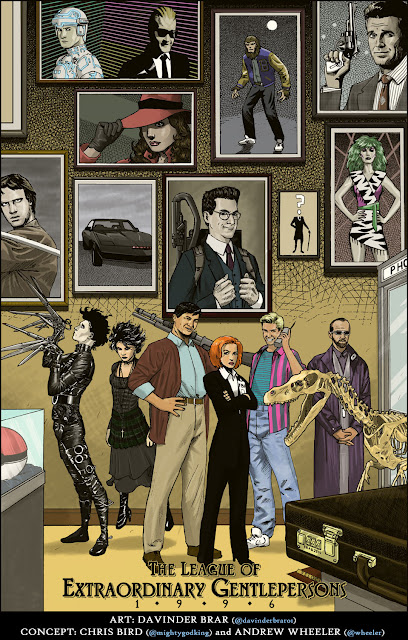 Here is the great synopsis the guys came up:


Abuse of Playback, the technologically-derived drug made from distilled human memories, is sweeping the world – and Special Agent Fox Mulder learned too late that Playback was put forth on this planet by the Purity, seeking to condition humanity to their rule so as to better combat the Deadite incursion threatening the aliens’ homeworld. Now Mulder is missing, and it falls to his partner, Dana Scully, to re-activate secret protocol LXG-71, the “League of Extraordinary Gentlepersons” (protocol renamed 1993 for “sensitivity reasons”).


Scully swiftly collects Hong Kong Detective-Inspector “Tequila” Yuen, hyperviolent Wiccan practitioner Nancy Downs, the biological experiment/walking weapon known only as “Edward,” and a young high-functioning sociopath named Zack Morris who has the strange ability to stop the flow of time itself. Perhaps it is this last who attracts the attention of an enigmatic man who answers only to “Rufus,” and who asks Scully to “set history right” and see that two young musicians – that, so far as she can tell, never existed – be born anew, so that peace may flourish on Earth. But the Purity have never shown any signs of temporal travel capability… so who, then, altered history?
Posted by Mike D. at 3:07 PM