Dark City is one of the most under-rated movies of all time. Alex Proyas crafted a masterpiece way back in 1998 that initially flew under the radar. Even though the film has gained some popularity over the years since its release, it is still only moderately known among film fans. This is a real shame, since there hasn't been many science fiction/thriller films that make you think and execute a complex plot as well as Dark City. Rufus Sewell, Kiefer Sutherland & Richard O'Brien (the original Riff Raff from the Rocky Horror Picture Show... wow!) all shine bright. If you are in the mood to have your head rattled a bit by a smart sci fi movie that will make you think, this is the one for you. Alien Corset has decided to commemorate the film with a killer poster that has made the '30 Coolest Alternative Movie Posters Ever' list overt at Shortlist.com. Thanks to Joe Fletch & Jeff Bond for both sending me links to these killer prints. You can see the full size poster after the jump... 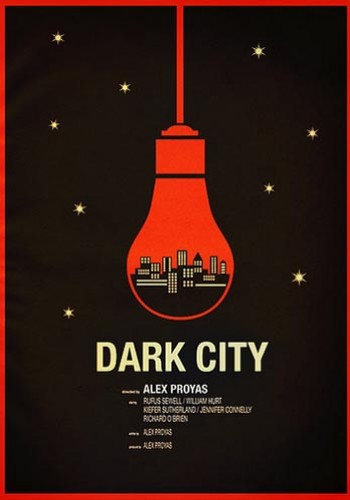