'Cloud Atlas': Now That Is A Movie Trailer!!!

Wow... wow! There has rarely been a time when i watched a movie trailer and was completely blown away and immediately drawn to a film in the way I am to Cloud Atlas, the new film from producer The Wachowski  Brothers & Tom Twyker. I have been hearing about this epic undertaking of a story for quite a few years, and I have been a bit intrigued. But after seeing the 1st trailer, I am all in. Why you ask? Well, it could be the cast. Tom Hanks, Halle Berry, Jim Broadbent, Hugo Weaving, Jim Sturgess, Hugh Grant, Susan Saradon... yeah, that is a pretty good start. Tom Twyker (director of the fantastic Run Lola, Run) and the Watchowski Brothers (creators & directors of The Matrix) are a great start as well. But that is not it... it is the 6 MINUTE FUCKING TRAILER!!!!! HOLY SHIT!!!! I have never, ever, ever seen a 6 minute trailer. A 3 minute trailer is usually referred to as extended.... what is a 6 minute trailer? It is epic!!!! Now I don't know exactly if this complex, time jumping storyline is going to end up awesome or end up being crapped on... but I know that this trailer has at least got my interest  up. I have often heard that the original book would be one of the hardest books to convert to film, but that didn't stop Twyker and the W brothers from giving it a college try. Check out the trailer (mini movie is more like it), poster, and a cool storyline breakdown (there are 6 storylines apparently, intertwining!) from /Film after the jump....

First, here is the trailer:

Now here is the poster (which I really like): 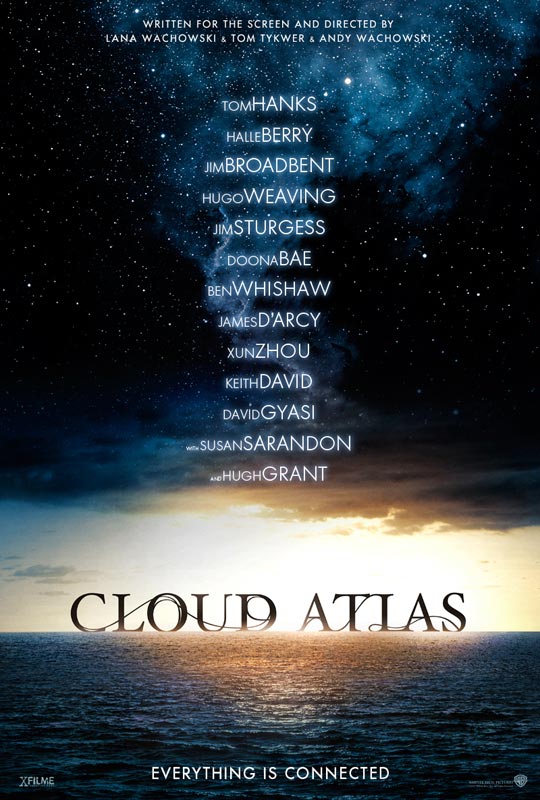 And now here is a rundown of the 6 different storylines by Russ Fischer of /Film, which I think may very well be the best film website out there:

OK, kicking things off, the “first” story is ‘The Pacific Journal of Adam Ewing,’ pictured above, which takes place in the mid 1800s. (It’s the first in the novel, at least, but we don’t know just how the film will structure things.) Tom Hanks features as a doctor who encounters a few unusual souls in the remote Chatham Islands, east of New Zealand, before journeying away by ship. Hugo Weaving‘s character talking about the “natural order to this world” factors in here. A diary chronicling that journey ends up in the next story.

The next is ‘Letters from Zedelghem,’ in 1931, in which Robert Frobisher (Ben Whishaw), a broke young English musician, takes a gig transcribing the work of a composer (Jim Broadbent, looking more friendly than I’d pictured him in the novel) living in Belgium. There’s a plotline with the composer’s wife, too, which is left mostly un-shown in the trailer. Seems like she’s also played by Berry. Letters from Frobisher to his perhaps-lover Rufus Sixsmith end up in the next story.

Then we bounce forward a half century to 1975, for ‘Half-Lives: The First Luisa Rey Mystery,’ in which, as the trailer shows, Halle Berry plays the title character. She’s a journalist investigating corruption at a nuclear power plant run by Hugh Grant. This is a pretty straightforward thriller story, but it does have some big elements that reverberate throughout the entire piece.

Her story is told as a novel manuscript which lands in the hands of Jim Broadbent’s title character in ‘The Ghastly Ordeal of Timothy Cavendish,’ which is the closest thing to a story set in our present day. (Halle Berry is in this one, too, which is the shot of her at the bar in the trailer, and Susan Sarandon shows up, too.) Cavendish is a vanity press publisher in trouble with the mob, who ends up stuck in a nursing home. This is almost a Twilight Zone sort of story — despite the wild fantasies of some of the other tales, this one might be the weirdest of the set. Cavendish’s story is told as a film within the novel, that is watched by a character in the next story.

Here’s the futuristic stuff: the corporate-controlled future South Korea of ‘An Orison of Sonmi~451.’ The title character here is a food service clone played by Bae Doona, who develops a bit more intelligence and emotional consciousness than she is meant to. That leads to problems in her totalitarian society, and as the action-oriented shots in the trailer show, this is the most obvious Wachowski aspect of the film.

Finally, the sixth story at the center of it all is ‘Sloosha’s Crossin’ an’ Ev’rythin’ After,’ in which Zachry (Tom Hanks) lives in post-apocalyptic Hawaii, where he encounters Meronym (Berry), a member of the last remnants of technologically-advanced civilization. They embark upon a journey that reveals some things about how all these stories and characters tie together.

Wow... you can see some great frames pertaining to each one of those scenes on /Film. So what do you think? Let us know in the comment section below.
Posted by Mike D. at 12:57 PM