So You’ve Seen THE AVENGERS…What Next? Questions Answered & The Future Predicted by James West

Chances are, you’re one of the millions of people who have seen what is one of (if not the) biggest superhero movies of all time, The Avengers. Based on the original Marvel comic by Stan Lee and Jack Kirby, The Avengers captured the essence of the comic book quite well: Earth’s Mightiest Heroes join forces to stop a threat not one of them could take on alone. Chances are, you loved the movie (93% Critical Rating, 96% Audience rating on Rotten Tomatoes), and, chances are, you want more. You might have questions (Just who was that after the credits?), or are interested in an informed comic book geeks opinion on what is going to happen next. You probably don’t, but what the hell, I’m bored. Here’s some  questions answered  and my predictions for the future of the Marvel Cinematic Universe!

Continue reading after the jump.... 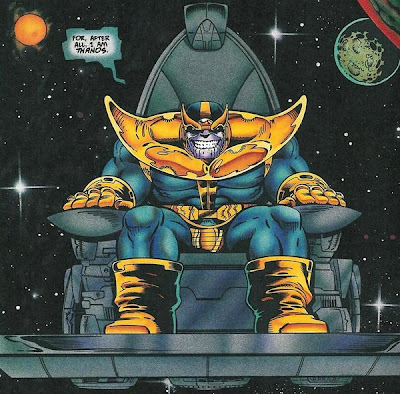 2-      Why should I care?
Thanos is one of the “big bads” of the Marvel Universe: he is in love with the physical anthropomorphism of Death (a woman in the Marvel U), and will do anything to please her. This is why he smiles when “The Other” tells him to attack Earth would be to court death.

3-      So why should The Avengers be worried?
Thanos is after something called the Infinity Gauntlet (which has a cameo in Thor). The Infinity Gauntlet collects each Infinity Gem, which each control a different aspect of the universe: Mind (Blue), Reality (Yellow), Power (Red), Space (Purple), Time (Orange), and the most coveted, Soul (Green). Combine them, and you essentially become God. 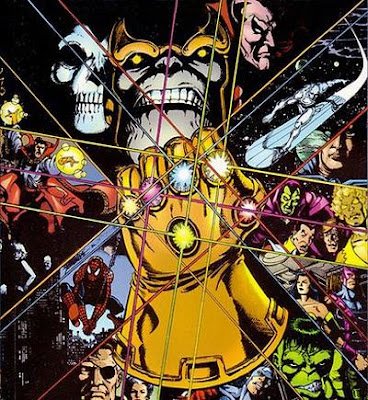 5-      What’s the deal with the different Hulk transformations?
The difference in the Hulk transformations is actually the result of some very nuanced character development on the part of Ruffalo and Whedon. At the beginning, the transformation is slow because Banner is fighting it. Once he loses control, the Hulk is a raging beast because Banner lost his temper. It’s comparable to when you or I lose our temper and do or say things we don’t mean, just on a Gamma-irradiated level. By the end of the movie, Banner comes to terms with his other side, and lets it come out (In my favorite scene in the movie), hence why the transformation is quick and Banner is (mostly) in control.

6-      Why doesn’t Thor fly up and save Iron Man?
Simple: Thor can’t fly. He throws his hammer, Mjolnir, and holds on to it. That’s why he always leads with it or does that super cool thing where he whips it around and it makes that noise. He can’t hover, levitate, or anything like that. His flight is more like a rocket. If he had tried to catch Iron Man, the collision probably would have killed Tony.

7-      Where was Spider-Man/Wolverine/Batman/Herp Derp?
Firstly, Spider-Man and Wolverine are not classic Avengers. They only joined recently after the Avengers had split up after Scarlet Witch went psycho. They were part of the New Avengers, which also included Cap, Iron Man, Luke Cage, etc. They recently joined The Avengers when the team reformed, but have even more recently left. Also, Marvel Studios does not have the rights to make a movie with them in it. The rights were optioned out years ago to studios like Fox and Sony. If the studios don’t make a movie with their character in a certain time frame, or the movie bombs (this happened with The Punisher), the rights revert back to Marvel. Judging by the success of the X-Men and Spider-Man franchises, unfortunately, I don’t see this happening soon. Batman/Superman/anyone with them are owned by DC comics. Different company. Herp.

8-      So, if they’re not gonna be in the next slew of Marvel movies, then who?
Well, great question, and it’s an even greater segue to my last segment…

So, what next? Here are my official predictions for the future of Marvel’s movies. We should have more confirmations about these around San Diego Comic-Con
Definite:
Iron Man 3 (May 2013)
Thor 2 (November 2013)
Captain America 2 (May 2014)

Iron Man 3 looks like it is to take place in China. With the casting of Ben Kingsley as the villain, this screams “Mandarin” to me (aka Iron Man’s archenemy whom we haven’t seen yet). The villain's been alluded to (Terrorists in the first movie are 'The Ten Rings'), but we haven’t seen him yet. I look forward to seeing if they bring him to the screen, and how. I believe it’s been confirmed that Black Widow will be returning, and I assume Banner will have a cameo or small role (maybe Hulk? Time will tell, could go either way).  It also seems they will be doing the critically acclaimed 'Extremis' story arc, where Tony’s suit literally becomes a part of him. If they do Mandarin, since his “magic” is actually technology from outer space, Thanos could easily be reference or brought in for another post-credits sequence.

As for Thor 2, I know nothing. I heard Surtur may be the villain. He’s a big fire demon sorta. I predict Loki will appear, though as a supporting character and not the main villain. Ideally I would like to see Enchantress and Skurge the Executioner, but, we shall see.

Kevin Feige, the producer/mastermind behind all these films has said that while Iron Man 3/Thor 2 will be very singular, Cap 2 will be closely related to the Avengers. My guess is that the plot involves a vibranium mine found in Wakanda, home of top-tier Avenger and the very first African-American superhero, the Black Panther. I think he will be an addition to the Avengers cast in the second film, which I will get to later.

When I say unannounced, I mean that a release date/definite production has not heavily started, as Dr. Strange, Ant-Man, and SHIELD rumors have all been abuzz. The particular slate seems difficult to do, then again, that was said about the previous movies as well. Apparently there is going to be 5 films before Avengers 2. Three of them will be the Iron Man/Thor/Cap sequels. I think you can put money on the other two being from this group.

Dr. Strange is not very related to The Avengers, and is more often just an ally as opposed to an actual member. However, there’s more to Marvel than The Avengers: and perhaps they’d like to show that with a movie about the Sorcerer Supreme. They haven’t really had a movie about magic yet (Thor is science that seems like magic), so it would be an interesting step. My concern is that, if it’s not connected to the Avengers, would people be interested in it, and if it is connected, can they afford squeezing the Doctor into the next movie without explicitly making him a member. Or, would they disregard comics and just make him a member anyway. It seems very difficult. 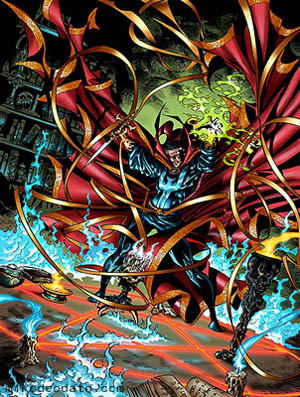 Ant-Man/The Wasp is a different story. The problem there does not lie with how they would fit into the universe. The two are founding Avengers in the comic books and add to the group dynamic. Hank Pym is a favorite of mine because his characteristically low self esteem makes him very compelling. Despite this low opinion of himself, he has the courage to get out there with the rest of the team. The Wasp is the level headed love interest to counter him. She’s a strong female character and one of the first female superheroes Marvel’s had, and has even served as de facto leader of The Avengers from time to time. The two could easily be introduced as SHIELD scientists, I would have no problem with that. Problem is…their powers. It might be hard to translate shrinking/growing powers to the screen in a way that doesn’t seem goofy. Looks awesome in the comics, but it could be a different story for a movie. Edgar Wright is slated to direct the Ant-Man movie, so if he played it up for comedy it could work. There was talk of half the movie being about Eric O’Grady, a disrespectful, funny character who takes the mantle of Ant-Man, but I don’t see that fitting in with the way Marvel has been doing the movies pretty by the books (and rightfully so). If they do bring in the Pyms, I imagine Avengers 2 would involve Hank perfecting the Giant-Man formula, while the Ant-Man/Wasp movie sticking strictly to shrinking.

A SHIELD movie is very compelling. They could go the prequel route, and have the main characters of Black Widow, Hawkeye, Nick Fury, Maria Hill, and Agent Coulson dealing with something in Budapest (as was alluded to in The Avengers). This would develop the characters further, but, being a prequel, wouldn’t do much for the overarching plot. If they set it in the time frame of the other movies, then Coulson wouldn’t be in it (or would he be…more later!). However, then they could develop the story AND the characters further (I love me some Hawkeye, but his next role should be larger).

Incredible Hulk 2 is based purely on the large reaction the audience has had to Ruffalo and the Hulk in The Avengers. They pretty much finally got it right, with Ruffalo being soft spoken and relatable, portraying the guilt and rage of having the Hulk in his head, and the Hulk being the perfect personification of a rage beastly monster. The movie could also tie up what is so far the only loose end in the MCU (Marvel Cinematic Universe), which is The Leader getting his powers at the end of The Incredible Hulk.

The Guardians of the Galaxy: Star Lord, Drax the Destroyer, Adam Warlock, Gamora, Cosmo, Rocket Raccoon, Groot, Moondragon, Bug, Jack Flagg, Vance Astro, Phyla-Vell. If you’re gonna have Thanos…you’re gonna have The Guardians there to fight him. They obviously can’t have the full roster: my guess is maximum 5 or 6. Plus, they could introduce Adam Warlock in Thor 2 (He did fight Thor before he went to outer space in the comics) so the audience would have some familiarity. Who knows? Maybe the post credits sequences for the next few films will involve the Guardians. Plus, Kevin Feige (the producer) said he wants to make a Guardians movie (as well as an Inhumans movie, but Guardians correlate more with Thanos). 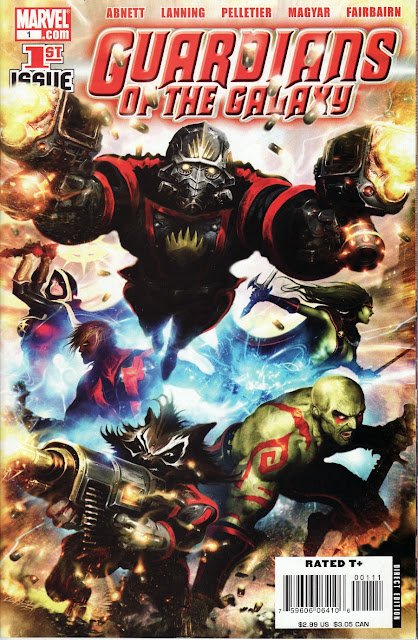 As for The Avengers 2? Since Thanos is after the Infinity Gauntlet, I’m guessing the Infinity Gems are going to be alluded to over the next slate of movies. Avengers 2 would involve the gems, the gauntlet, and a whole lot of cool cosmic stuff. Maybe we’ll even get the Chitauri’s other name (Skrulls) and their mortal enemies (The Kree…and maybe the hero from their race, Captain Marvel?).

So that’s it for movies. To close this all off, here are my top three guesses for new additions to the Avengers roster for the sequel.
1-      Black Panther: I think this one’s a no brainer. First black superhero, top tier Avenger, awesome looking costume…he might get some “Batman” jokes but I think we’re going to be seeing the King of Wakanda without a doubt. 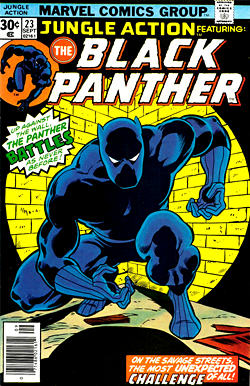 2-      Ant-Man/The Wasp: You can’t really have one without the other, and given the importance these two have to the Avengers mythos, I can’t really see them being left out for much longer either. 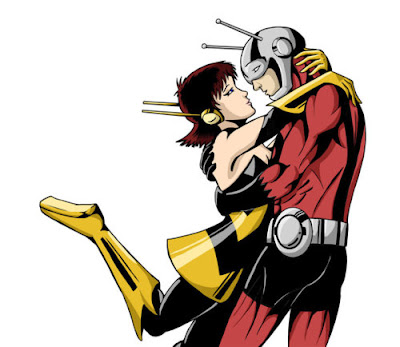 3-      Ms. Marvel: Who? Well…it’s a long story. I’m being lazy but check her out on Wikipedia. The way she gets her powers totally checks out with the cosmic route they seem to be taking, and she’s a fan favorite. 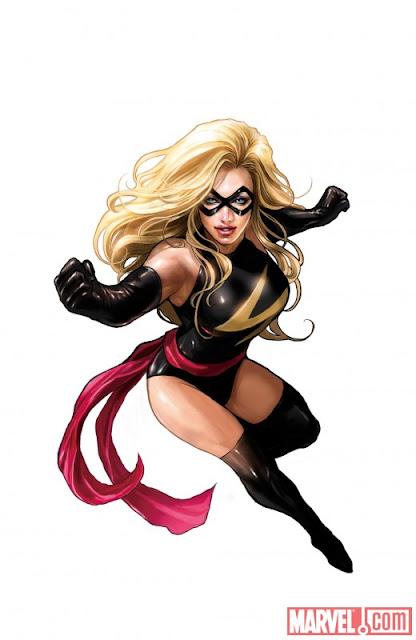 Runner-up- The Vision: There have been talks of making Agent Coulson into the Vision. It wouldn’t necessarily fit in with the comic books, but…hey, I think it might work. Clark Gregg would have made an excellent Vision had he never been Coulson in the first place. Plus, Gregg recently retweeted a fan who asked, “If someone lost their good eye, can they have good Vision someday?” Very. Intriguing. 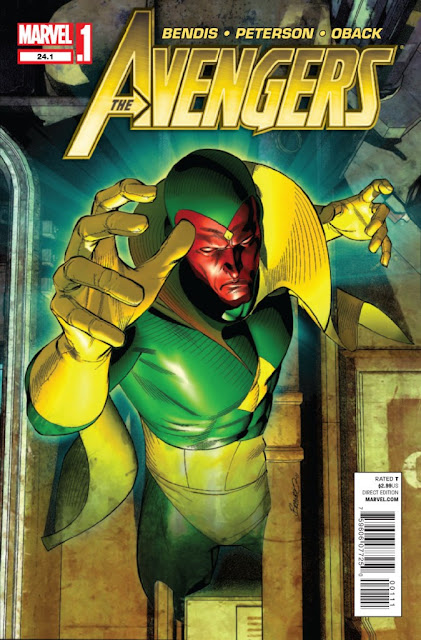