Maurice Sendak: The Author Of My Favorite Children's Book Dies At Age 83

I will never forget the first time I saw the famous cover of 'Where The Wild Things Are', with its sleeping monster in Maurice Sendak's unique artistic style. I was 5 years old, walking into Mrs. Adler's Kindergarten classroom at P.S. 207 in Howard Beach, NY. My dad was NOTORIOUS fr always being late, but this was my first day of school and he wanted to get me there early. I arrived first, and was met at the door by Mrs. Adler. She smiled at me, welcomed into my first classroom, and told me to go take a book as I was waiting for my fellow classmates to arrive. I said goodbye to my pops, moved across the strange place to the book shelf, and scanned the titles for something interesting to peruse. My eyes immediately locked on to "Where The Wild Things Are". The sleeping monster had such a unique look and I needed to see more. From that moment on anytime we had a chance to free read a book from the shelf I chose that book. There were other great ones (Danny & The Dinosaur, The Bernstein Bears, multiple Dr. Suess books, etc), but I always rotated back to Sendak's epic book. It had my heart...

Click after the jump for more from Mike D 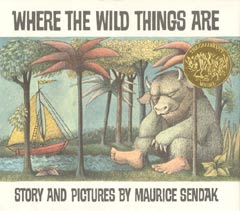 My love for Sendak had never wavered over the years. As an adult I have always revered the images from "Where the Wild Things Are". My Google profile pic is Max & the Monsters swinging from the trees. The first book I ever bought for my son after he was born was "Where The Wild Things Are". He loves it almost as much as me now. When the Spike Jonze movie came out adapting the book, my fiance Tara knew just how important it was to me. She got us tickets to the midnight screening on a Thursday night, even though she had work the next day. On the way there we got a flat tire. I couldn't get the lug nuts off to change the tire, so we were going to have to call roadside assistance. But I had to see this movie and couldn't wait for that to happen. I had been waiting for this film adaption for years. Tara saw it in my eyes. So she begrudgingly agreed to let me drive on the flat to the theater and we would deal with the flat AFTER the movie. That is true love. By the time the flick was over and we got the flat fixed, we got home around 3:30 am. She had to leave for work at 6:30 am. But neither of us were sad. We were so high on the magical world of Sendak that we both went to bed with thoughts of wolf suits and mythical monsters, not about waking up for work. It was glorious. 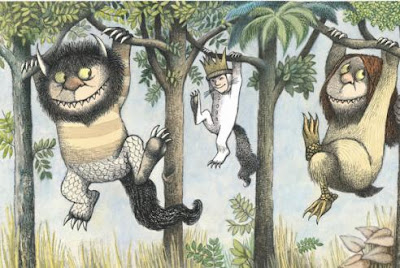 I am saddened by the death of Sendak, but it is more for my own selfish reasons. He was one of the few famous people I had HOPED to have met before they passed on. My favorite Actor, Actress & Director died before I could meet them (Peter Sellers, Audrey Hepburn & Stanley Kubrick), but Sendak seemed so alive whenever I saw him (like on the Colbert Report...classic) that I felt like I had forever to meet him. Now I won't have the shot. He now joins the group of my fantasy dinner party, with the likes of Sellers, Kubrick, Hepburn, Babe Ruth, Salvador Dali, Bob Kane, Frank Sinatra, Marilyn Monroe, Pistol Pete Maravich and other famous folks who I would love to have met. Man that party would be great!

So Rest in peace Mr. Sendak. Thanks for "Where The Wild Things Are", all 328 words in it. I can't wait to read it with my future children, grandchildren, and anyone else I can. You will be missed. Rest In Peace!!! 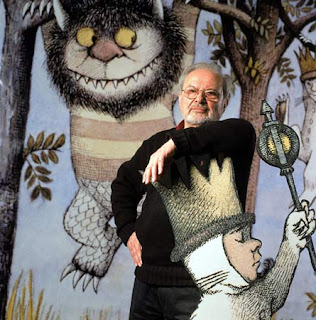 Email ThisBlogThis!Share to TwitterShare to FacebookShare to Pinterest
Labels: Celebrity Deaths, Maurice Sendak, R.I.P., Where The Wild Things Are