John Carter: A Retrospective Rant On Originality by Mike D

Damn, damn, damn!!! Why? Why?? Why??? How come people couldn't just bite the bullet and go out to see John Carter last week? Where is the blind faith that propels shit movies to record breaking numbers at the box office and makes Avatar the highest ranked box office film of all time? How can a company that is as seasoned and well respected as Disney not generate the build up necessary to get Carter going in the right direction? Especially since the movie is pretty fucking good.... why? If any of these things would have happened, I wouldn't be sitting here about to bitch and moan about one of my favorite fictional properties of all time. But since Carter only made 30 mil this week at the box office, it looks like it's rant time... so here goes nothing!!!

Click after the jump to see the rest of the article:

Here is the thing: I never hid the fact that I was excited for this movie.  I have read 7 of the 11 Martian Chronicle books from Edgar Rice Burroughs and they are some of the best written stories that I have ever read. But to me the thing that always blows my mind is that Burroughs did this way back in the day... like 100 years ago! When you take this into consideration, it is absolutely mind blowing. Burroughs wrote a sci fi tale about space travel that involved space ships, time travel, and all other types of advanced technology long before cars and television were even common in anybodies home!!! Given the technology we posses today, it is easier for a sci fi author to "take it to the next level" when they are writing their stories. But to make this stuff up out of thin air with relatively no real life things to base them on... now that is impressive!!!  In my eyes this makes the Carter stories that much cooler.

This brings us to the next point: John Carter rips off sci fi movies like Aliens, Avatar, Star Trek, Total Recall, and Star Wars. This is so fucked up. How can something that is OVER 100 YEARS OLD be stealing from movies written in the past 30 years? Yet this is the general opinion that is being pushed in movie reviews across the 'Net and in mainstream media publications. That is a travesty that a bit of fact checking and a quick trip to Wikipedia could have prevented. In actuality, John Carter is the property that was stolen from... repeatedly!!! Need some proof? Ok, here are a few general examples:

Now that was just 10 examples of blatant rip offs..... and there are tons more. To hear that Disney's Carter is ripping of these established films just hurts me to my heart. And now that the film is not performing well, people are just piling on and hating randomly, not even thinking about what they are saying. I'm not sitting here saying that everyone HAS to like John Carter.... shit, hate the film if you want! But don't say that you hate it or it's no good because it is rehashing ideas of other films. This is the BLUEPRINT for all the sci fi you have ever seen!!! 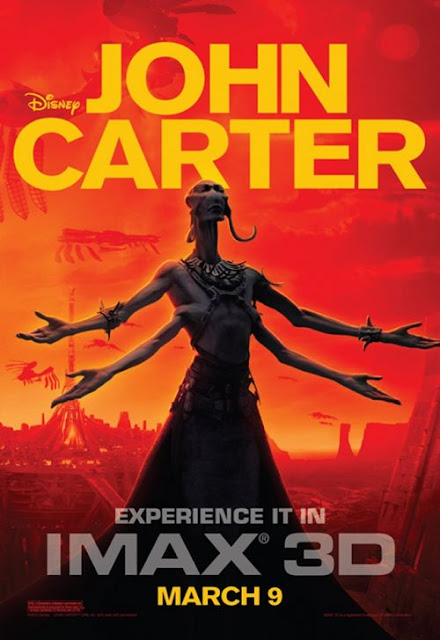 This sets up an interesting situation. Disney has to decide if they want to go forward with a Carter sequel. The second book, The Warlord of Mars, is an insane book that may very well be the best in the series. It is wild story and could make for a great movie. I see it as a chance at a film that could be a successful in it's storytelling as Empire Strikes Back. But will they even take the shot considering how expensive this film was and d the amount of money it hasn't made. It's sad. I hope it does well enough here in the US and internationally to justify a sequel, and maybe it will break through with round 2. I thought the film was great. Go see it. Or tell me you hate it.... but don't try to call it a carbon copy. Andrew Stanton has done quite well on this one.  What is your opinion? Tell us in the comment section below...