Company wide crossovers tend to be both a gift and a curse to the world of comic books. Some have produced epic story lines that have shaped the fabric of the companies landscape (Crisis On Infinite Earths & the recent Brightest Day/Darkest Night saga for DC Comics and Secret Wars I& II and Secret Invasion for Marvel Comics). These crossovers have also produced some stinkers (Final Crisis for DC, Acts of Vengeance for Marvel Comics) throughout the years. But Marvel finally announced a crossover for next year that they have been teasing for a bit, and I couldn't be more excited. Click after the jump to hear more about the upcoming company wide crossover that will be known as AvX, Avengers vs X-Men!!!

Here is what Marvel has said so far about the event upcoming event:

The Avengers and X-Men have learned that the all-powerful embodiment of both death and rebirth known as the Phoenix Force is on a crash course for Earth... and it needs a new host to unleash its immeasurable power. But what is the shocking decision tied to the Phoenix's return that will pit the Avengers against the X-Men? And when good friends become bitter enemies, what does this mean for the future of the Marvel Universe? 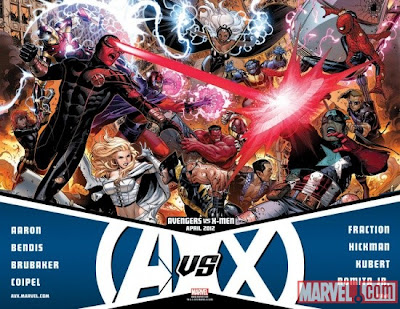 All of this hinges on Hope Summers, a young mutant from the future raised by Cable as a daughter and may or may not be related to Jean Grey (the original Phoenix/Dark Phoenix). Once the Phoenix Force is identified as heading to earth to look for a host, the problems begin. the X-Men feel that they should keep hope with them and begin preparing her for what might happen if she does get chosen to be the new Phoenix. The Avengers have a different view on things and want Hope turned over to them so they can keep her from ever being infected by the Phoenix Force. Neither side seems to be wrong here, so in reality you are actually having a Good Guy vs Good Guy clash that is sure to make for some interesting books. The series launches with a #0 issue in April 2012 and will have 12 issues released bi-monthly. I can't wait!!!

They have been hinting at Hope's importance for some time, so either she is about to become really important character or is just the Macguffin in the whole saga ... we shall soon see. Marvel is hosting a Live Stream press conference TODAY December 7th at 3:00 PM Eastern (view it by clicking here) so hopefully there will be more information soon to follow. I'm sure we will be talking more about this in the near future....

On another note, Marvel has said that if you pick up these 13 issues in the store they will come with a code to allow you to also DOWNLOAD a digital copy of the books from the Marvel App for no additional charge. As a collector but also a new owner of a Kindle fire, I look at this as a Win/Win because I can now have my collectors item in the actual issues and portability of the digital issues for ONE PRICE. Sounds good to me...
Posted by Mike D. at 10:42 AM