Steven Spielberg Proves You Don't HAVE To Be A Douche (Did You Hear That George Lucas???)

I came across these wonderful quotes from superstar director Steven Spielberg in regards to digitally editing some of his classic movies such as Raiders of the Lost Ark & E.T. for future editions. You see George... you can make mistakes and still redeem yourself. Listen to your boy Stevie... (See Spielberg's quotes after the jump) 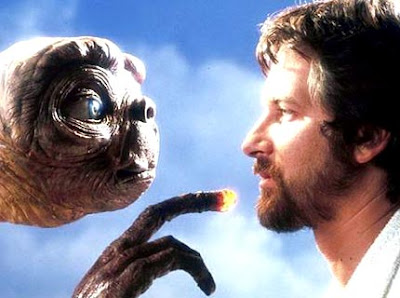 Here are Steven Spielberg's comments on an upcoming Blu Ray version of Raiders:


This is the best I think it’s ever looked, because in preparation for the eventual release on blu-ray we had to correct the print again and get the original negative out of the salt mines, and then we had to do the separations, and basically the files, which are just amazing, with all the technology of today, without changing any of the movie materially, we haven’t removed anything, we haven’t added CGI, there’s no digital enhancements! It’s purely the movie you some of you may remember from 1981.

Wow... sounds like Steve has a good outlook on things. Now check out his regrets on digitally altering Raiders and E.T.:


For myself, I tried [changing a film] once and lived to regret it. Not because of fan outrage, but because I was disappointed in myself. I got overly sensitive to [some of the reaction] to E.T., and I thought if technology evolved, [I might go in and change some things]…it was OK for a while, but I realized what I had done was I had robbed people who loved E.T. of their memories of E.T. [...] If I put just one cut of E.T. on Blu-ray and it was the 1982, would anyone object to that? [The crowd yells "NO!" in unison.] OK, so be it.

Wow... you see that? Stevie not only makes fanboys all over the world happy by talking about "robbing people who love E.T. of their memories of E.T" but he also does so by NOT throwing Lucas under the bus and saying he wouldn't edit or not edit based on fan reactions. 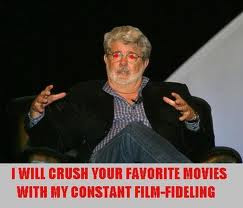 Even though that is exactly what he is saying... he chose to keep it positive and defend the honor of the ORIGINAL FANS that made his early movies (and effectively Steven Spielberg himself) the epic successes they have become. Who cares if you can see a reflection or something doesn't look perfect? If we loved it then, we will love it now. I commend you Steven. now get them damn guns back into that childhood alien movie, will ya????