More Proof That George Lucas Is A Douche...

Even though CCD was still on Summer break this past week, I received tons of emails from friends and associates wanting to know my opinion on even more announced changes to the original films by George Lucas when the new Blu ray versions of the entire saga came out. Given our past tumultuous relationship with Georgie Boy and the scummers over at Lucas Arts, I abstained from commenting about this latest ass fuck courtesy of Lord George to all his loyal fans. But I have uncovered an article on the 'Net that is sure to make you even more mad at Uncle George... (Continued after the jump)

... because way back in 1988 he actually testified in front of Congress ABOUT THE ALTERING OF FILMS FROM THERE ORIGINAL INTENDED STATE!!!

Yup, you read that right... the guy who has been changing the Star Wars franchise every chance he gets actually testified before Congress on just how bad it would be for people to edit films from the past with new technologies. Thanks to the cool ass website Save Star Wars, we have the full speech for your viewing pleasure.


"My name is George Lucas. I am a writer, director, and producer of motion pictures and Chairman of the Board of Lucasfilm Ltd., a multi-faceted entertainment corporation. I am not here today as a writer-director, or as a producer, or as the chairman of a corporation. I've come as a citizen of what I believe to be a great society that is in need of a moral anchor to help define and protect its intellectual and cultural heritage. It is not being protected.

Can you believe the balls on this guy? Wait, it gets better!!!


The destruction of our film heritage, which is the focus of concern today, is only the tip of the iceberg. American law does not protect our painters, sculptors, recording artists, authors, or filmmakers from having their lifework distorted, and their reputation ruined. If something is not done now to clearly state the moral rights of artists, current and future technologies will alter, mutilate, and destroy for future generations the subtle human truths and highest human feeling that talented individuals within our society have created.

How George? By having Vader scream "Nooooo!!!" like a pansy when tossing The emperor overboard   in Jedi, or having Greedo shoot first to justify Han killing him? Dick....


A copyright is held in trust by its owner until it ultimately reverts to public domain. American works of art belong to the American public; they are part of our cultural history. People who alter or destroy works of art and our cultural heritage for profit or as an exercise of power are barbarians, and if the laws of the United States continue to condone this behavior, history will surely classify us as a barbaric society. The preservation of our cultural heritage may not seem to be as politically sensitive an issue as "when life begins" or "when it should be appropriately terminated," but it is important because it goes to the heart of what sets mankind apart. Creative expression is at the core of our humanness. Art is a distinctly human endeavor. We must have respect for it if we are to have any respect for the human race.

Notice how he uses the term "for profit" there when calling the defilers of films "barbarians". He is not merely talking about people who pillage public domain films that no one owns the copyrights to anymore... he is singling out ANYBODY looking to ransack a culturally significant film and make money on it. Who would do something like that???


These current defacements are just the beginning. Today, engineers with their computers can add color to black-and-white movies, change the soundtrack, speed up the pace, and add or subtract material to the philosophical tastes of the copyright holder. Tommorrow, more advanced technology will be able to replace actors with "fresher faces," or alter dialogue and change the movement of the actor's lips to match. It will soon be possible to create a new "original" negative with whatever changes or alterations the copyright holder of the moment desires. The copyright holders, so far, have not been completely diligent in preserving the original negatives of films they control. In order to reconstruct old negatives, many archivists have had to go to Eastern bloc countries where American films have been better preserved.

Ha! Double Ha!! Triple Ha!!! The gall on this prick. Not only has his actions over the past twenty years completely contradicted everything he said in front of Congress, but it seems he used his speech as an exact blueprint on how to become a film pillager himself !!! "Engineers with THEIR COMPUTERS"... what a dick!

In the future it will become even easier for old negatives to become lost and be "replaced" by new altered negatives. This would be a great loss to our society. Our cultural history must not be allowed to be rewritten.

There is nothing to stop American films, records, books, and paintings from being sold to a foreign entity or egotistical gangsters and having them change our cultural heritage to suit their personal taste.


I accuse the companies and groups, who say that American law is sufficient, of misleading the Congress and the People for their own economic self-interest.I accuse the corporations, who oppose the moral rights of the artist, of being dishonest and insensitive to American cultural heritage and of being interested only in their quarterly bottom line, and not in the long-term interest of the Nation.The public's interest is ultimately dominant over all other interests. And the proof of that is that even a copyright law only permits the creators and their estate a limited amount of time to enjoy the economic fruits of that work. There are those who say American law is sufficient. That's an outrage! It's not sufficient! If it were sufficient, why would I be here? Why would John Houston have been so studiously ignored when he protested the colorization of "The Maltese Falcon?" Why are films cut up and butchered?

Why the fuck is anybody gonna listen to John Huston? He didn't have crazy billions like you do right now George. And you could really do something now with all that money if you wanted to... really save the cultural relevance of Star Wars for future generations by simply doing one thing: Nothing!!!!


Attention should be paid to this question of our soul, and not simply to accounting procedures. Attention should be paid to the interest of those who are yet unborn, who should be able to see this generation as it saw itself, and the past generation as it saw itself. I hope you have the courage to lead America in acknowledging the importance of American art to the human race, and accord the proper protection for the creators of that art--as it is accorded them in much of the rest of the world communities."

I hate George Lucas right now after reading this speech more then I ever did before. Most of you guys know me as a Lucas apologist... but no more! I don't condone your fucked up editing choices, but they wouldn't seem nearly as bad if you hadn't passionately ranted IN FRONT OF CONGRESS on how morally wrong they are!!! Fuck you George Lucas... fuck you up your stupid ass. Oh, and one more thing: I AM NOT BUYING YOUR FUCTARD BLU RAY SET BECAUSE YOU HAVE SUCCEEDED IN MAKING DARTH VADER SEEM LIKE A WHINY BITCH.... and because you are a dick! 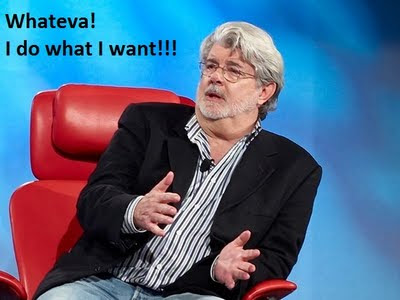