Craig Stuckless Redesigns The Batman # 400 Cover And Takes Me Back Into Time...

Way back in 1986 I was just a wee ole lad getting into the comic book collecting hobby. It was a different world back then. Kids could travel freely around their neighborhoods at a young age and play without constant adult supervision. As a 7 year old, I often hit up multiple candy stores and Optimo shops in Ozone Park, Queens that sold comics to peruse the different selection they would have. I must have purchased hundreds of issues of comics, but one always stuck out to me: Batman #400 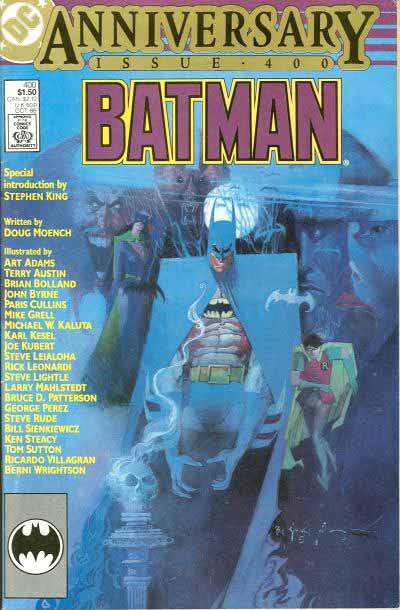 ***Please click Read more below to see Stuckless's version of Batman #400***
That beautiful cover by comic legend Bill Sienkiewicz was a masterpiece. It really made The Batman look like a monster, scarier then usual.The squared of shoulders and the height of the horns on the costume definitely conveyed the fear that Bruce Wayne intended for this little comic book fan. The book was phenomenal. I didn't realize it then (cause I was 7 and hadn't read tons of character backstories like I have now) but this was the final appearance of Pre-Crisis Earth One Batman, with issue #401 featuring New Earth Batman (if you don't know what that means, I strongly suggest that you pick up the original Crisis On Infinite Earths asap, get a fucking clue and stop calling yourself a comic book geek cause your not... er,um, sorry for that nerd rant!!!). Plus it was huge, like 4 times bigger then a regular monthly. It was one of my favorite comics.
The story was amazing. Ra's Ah Ghul breaks out literally ALL of Batman's villains from Arkham Asylum and offers a 10 Million dollar bounty on the head of the Bat. He also volunteers to help Batman recapture the villains in exchange for an alliance. Batman declines, and Ra steps away... and the chaos begins. The Gotham City PD is totally hijacked by The Joker & Penguin, Alfred and Vicki Vale are kidnapped, and utter chaos in enveloping Gotham as literally EVERY villain from 50 years of Batman comics gets a panel or two. Batman teams up with Catwoman and Robin (Jason Todd, pre crowbar beatdown) teams up with Thalia Al Ghul to thwart the evil doers. Then there is an epic final showdown between the good guys and Ra's himself!!! A fun filled story through and through...
When I checked out Covered (a website where artists recreate classic comic book covers in their own styles) this week I saw Craig Stuckless's version of Batman #400 and it sent me flying back through time. Check it out (and click the link above to hear Craig's take on the choices he made for the re-design!): 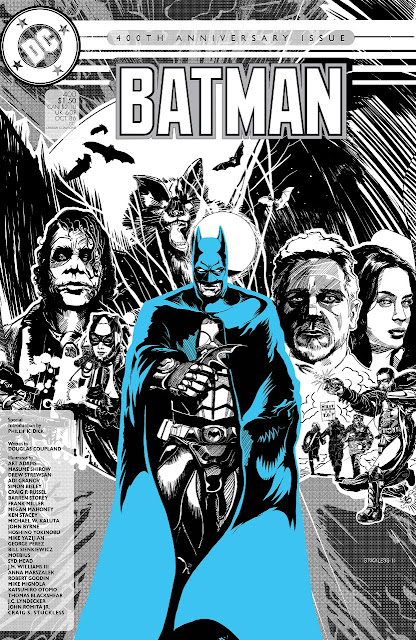 I really like the color to balk & white contrast that Stuckless uses, and the modern takes on the characters portrayed. Batman gets an update, but the Heather Ledger-esque Joker and the futuristic costumes of Catwoman and Robin really stand apart from Seinkiewicz's original portrayals of the two. I wanted to thank Stuckless for reminding me how great this book was and this weekend I am going to dig it out of my longbox for my son Mikey to enjoy. The cycle continues... God, it's good to be a comic book fan!!!
Posted by Mike D. at 8:50 AM