You The Fan Get to Pick The Official 'Twixt' Movie Poster... Go Vote!!!

One of the more intriguing stories to come out of the past Comic Con weekend was the excitement over Francis Ford Coppola's new movie, Twixt. It stars the beautiful & talented Elle Fanning (Super 8 & sister of Dakota Fanning) & one of my faves, Val Kilmer. It's a 3-D horror film with a very twisted premise, and Coppola was out in full force trying to sway the geek vote to anticipate this one. Looks like it worked, as the Internet is buzzing about this dream-like (or should I say nightmare-like) surreal film. Now the people responsible for the film are allowing the fans to pick which movie poster the film will use when they start promoting it. Check after the jump for all the details.


***Please click Read more below to see more about the Twixt movie posters***
After the unconventional success of Kevin Smith's Red State, filmmakers are willing to take all types of chances with their movies. It seems Coppola is heading down that path as well. Coppola has talked about rolling out the film himself (ala Kevin Smith) with one night screenings and then editting the movie AFTER each screening according to audience reaction. This means that every night the movie will be different. Now that is a first... and seems like an awful ,ot of work! Also, they released 4 versions of the movie poster and will be holding a fan vote on the Twixt facebook page. Here are the choices (but you must click here to go to Facebook and vote yourself). 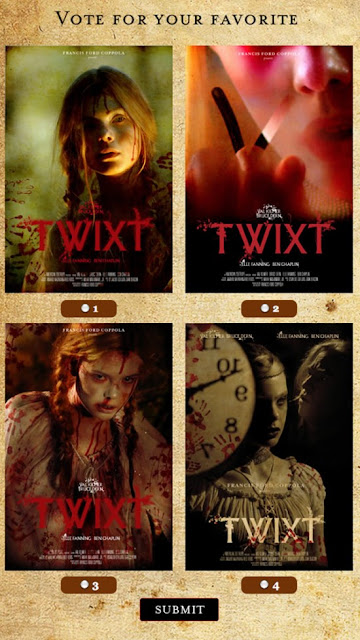 What do you think? Which one do you like? I am a fan of all four, but #3 is doing it for me. Right now it is in second place. If you had the power to make the final choice, which one would you go with? Tell us in the comment section below!
Posted by Mike D. at 9:47 AM