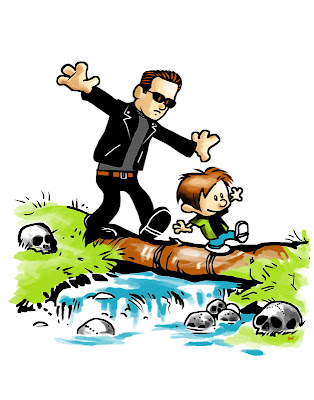 Artist Ninja Ink flips the Calvin & Hobbes buddy concept on it's ear with these awesome pieces depicting Johnny & his Uncle Bob from The Terminator series. I love these two pictures. Here is a brief synopsis from Ninja Ink's Deviant Art page talking about his fictionalized comic strip:


Johnny and Uncle Bob is a syndicated daily comic strip that was written and illustrated by American cartoonist James Cameron, and syndicated from October 26, 1984 to August 29, 1997. It follows the humorous antics of John, a foul mouthed six-year-old boy messiah, and Uncle Bob, his stoic robot friend. The strip depicts John's flights of fantasy and his friendship with Uncle Bob, and also examines John's relationships with his mother and psychiatrists. Uncle Bob's dual nature is a defining motif for the strip: to John, Uncle Bob is a cybernetic organism surrounded by living tissue; all the other characters see him as a time travelling villain. 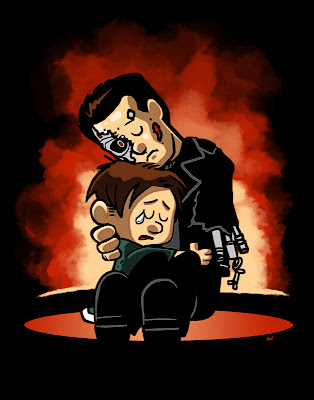