Harry & The Gang...Through the Years 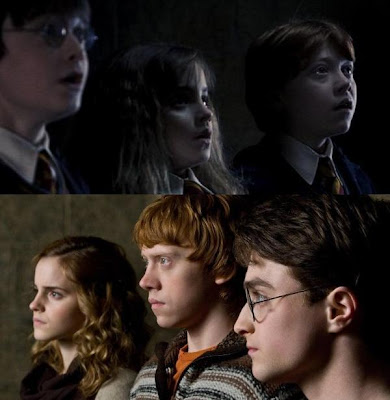 I have been a huge fan of both the Harry Potter book and movie series since the very beginning. Like it or not, JK Rowling's extensive 7 book series will go down in history as one of the most epic series ever written. She is right up there with Tolkien and C.S. Lewis as having crafted an amazing epic adventure surrounding Harry and his pals Hermione & Ron. But reality is that its been 10 years and these kids have grown up right in front of our eyes. This has never really happened before, as they were picked at the perfect age to grow at the same rate as their character counterparts do in the book. Need proof on how much they have grown? Check out this well crafted fan video, "Through the Pensive":

Wow. It's amazing how far they have come. Here are the words of Genrocks, the creator of the vid:


Over the years, the Harry Potter series has had a very special place in my heart. With the final film coming out in 50 days, I thought it would be a good time to look back at the journey we've taken with the film versions of JK Rowling's unforgettable characters. A retrospective spanning all eight films, this tells the story of the bravery of children, the folly of the powerful, and the overriding force of love.

Well said. The last installment of the franchise, The Deathly Hallows pt. 2, opens up on July 15.
Posted by Mike D. at 10:42 AM