Bellflower Is The Indie Movie You HAVE To See This Summer!!!! 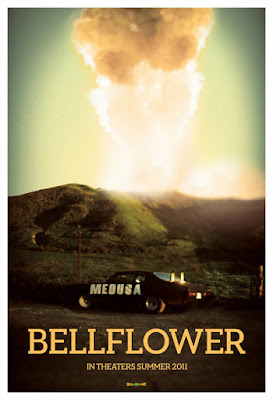 One of the perks of running this wonderful blog is that I occasionally get invited to advanced screenings for certain films. This could mean seeing a movie 2-3 months before the film gets a wide release. A few months back Jeff and I got a chance to see a little indie movie called 'Bellflower' (thanks Tolley!!!). The movie was generating lots of buzz on the 'net do to a warm reception it received at the SXSW festival. I am not going to get into a review of the movie right now (I'll be posting that closer to the release date... don't want to spoil it for ya!!!), but I will say that this is one wild ass movie that will have you on the edge of your seat. A full length trailer has finally been released, and i thought you all should see it ASAP. Here you go!

I know... its a lot to take in. Two guys who are building Mad Max style weapons and cars just IN CASE the apocalypse comes? Yeah, the movies even cooler then it sounds. The relationship issues, crazy car scenes, and flamethrower/gun-play in this one will definitely make you smile... at least if you have a sick world perspective like me!!! The film opens August 5h in NY and LA with a National roll-out to follow. Take a break from the mainstream summer fare and give this one a shot. You will be entertained... trust me.