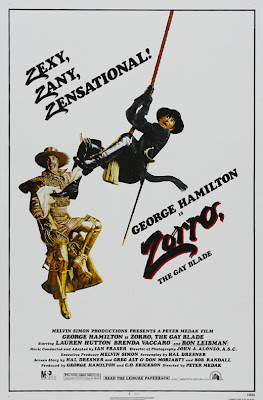 This 1981 film starring George 'The Tan' Hamilton was hysterical and very ahead of its time. It features Hamilton in a Golden Globe nominated dual role as both Zorro and his gay twin brother Bunny Wigglesworth. After his brother gets injured by a foe, Bunny comes back to California to take up the mantle of Zorro to help out his brother... but he does it in quite a gay-er fashion than the original. See for yourself: (I know the voice is a bit off in this trailer, but it was the best I could find!)

This is a funny comedy that always makes me laugh. Hamilton really sells both roles. Not to mention that hottie Lauren Hutton looks amazing here once again. I miss these 80's era comedies that I can not believe ever got made in the first place. Can you imagine the pitch meeting for this one? Can you imagine everyones face when they say Hamilton would be going from this: