Hiya kids, its your boy JoeyEsq here and its time for another (long overdue) installment of “Takin’ You Back… Way Back”, my column here at CCD where I show some love to the forgotten toys of that magical decade, the 1980’s. For those of you familiar with the column, you’ll notice I’m flipping the format up a little bit here and only covering one toy line instead of my usual five. I’m doing this because I try to cram in as much detail into these things as I possibly can, and I’m well aware that many of you don’t have the time to read 20,000 word dissertations on Battle Beasts and Visionaries. This is because your priorities are entirely out of whack, but there’s nothing I can do about that. Also, I have a list of about fifteen more toy lines I want to cover, and this way I’ll have subject matter for a bunch more articles instead of only three (which at my current posting rate means I'll be wrapping up this column sometime in 2018). For those of you reading this who are not familiar with the column, you can read the previous entries here, here, here, and here. Now, on to today’s topic, Bravestarr.

I don't remember all that much about BraveStarr, which regular readers know is kind of unusual since when it comes to 80's geek culture, I tend to remember everything. I mean, I know I watched the cartoon as a kid because the theme song is still embedded in my brain to this day, but my knowledge seems to end there, so this one's gonna require a little research.
Unlike many popular cartoon/toy combos of the 80's, where the cartoon would be developed to support (sell) the toyline, the BraveStarr concept came from the animation studio first. The cartoon originally aired from September 1987 to February 1988 in syndication, and  was the last animated series produced by Filmation (who brought us such notable 80’s cartoons as He-Man and the Masters of the Universe, She-Ra Princess of Power and Ghostbusters – the one with the monkey, not the one based on the movie). The idea for BraveStarr began with Tex Hex, the chief villian of the series. Tex Hex was created by Filmation's staff artists in 1984, during the development of Ghostbusters. Lou Scheimer, Filmation's executive producer (his name should be familiar if you read cartoon credits as a kid like I did) found the character fascinating and pulled Tex Hex from the Ghostbusters cast and decided to develop a sci-fi western around the character. The result was BraveStarr. 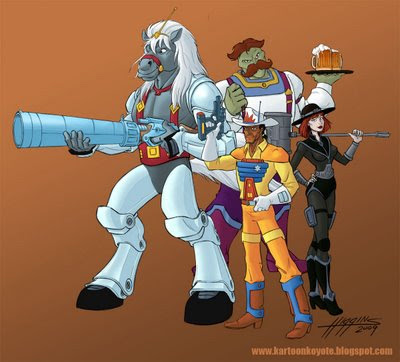 The story is set in the 23rd century (around 2245) on a distant planet called New Texas (which, in an attempt to razz my more left-leaning friends, I will say sounds like a wonderful planet to live on right off the bat). New Texas is located 600 parsecs from Earth, has "a sky of three suns" and a native population of "Prairie People," which are small beings who resemble prairie dogs. New Texas has been colonized by a multi-planet government. A mineral called Kerium, which is ten times more valuable than gold, is discovered there, giving the planet a valuable natural resource, and most of the episodes revolve around the heroes preventing the villains from stealing Kerium ore. The culture of the New Texas colony  which is inhabited predominantly by humans but also by various aliens and robots is based on the culture of the old west. In addition to Kerium mining, the planet is also the site of "solacow" ranching. "Solacows" are large cattle-like creatures. 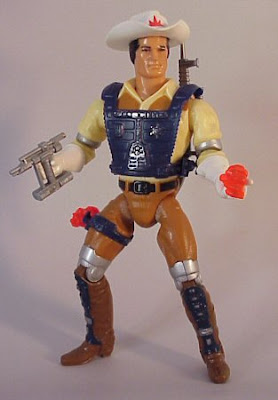 The toys actually hit store shelves in 1986, a full year before the TV series premeired. The toys were made by Mattel and were actually huge for the time, standing almost 8’ tall. Each figure had a unique action feature and was packaged with one or more Kerium nuggets. The Marshall BraveStarr and Tex Hex figures also included a “Laser Fire Backpack” which shot infra-red beams and had sound effects. If I remember right, the backpacks would explode when they were shot with the beam from the other figure, which was pretty cool. You could also buy the backpacks individually to outfit your other figures with them. They were blue for the heroes and black for villains, because in the 80’s we liked our toys color-coordinated and fashion conscious. 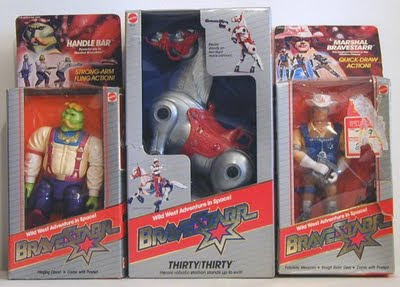 The characters in the series were very cool, if somewhat eclectic. Marshall BraveStarr was the galactic marshall charged with bringing order to New Texas. He was a Native American and could call upon the powers of spirit animals to help him fight (eyes of the hawk, ears of the wolf, strength of the bear, speed of the puma). In the show, these powers were never the literal equivalent to the attributes of the animals he invoked though. For example, the Strength of the Bear grants him far greater strength than any real bear, capable of lifting huge boulders, and similarly the Speed of the Puma allows him to run at immense speeds like the Flash. BraveStarr also carried a "Neutra-laser" pistol and a "Trans-freezer" rifle, but seldom uses either in the cartoon. He also had a spiritual advisor named Shaman. Think Obi-Wan Kenobi, only Native American and living in an animal-carved mountain called Starr Peak (in reality Starr Peak was the remains of his crashed starship, covered by cooled magma, under which is a large Kerium deposit). I’ve gotta say, this show had a pretty cool mythology for a one-off late 80’s cartoon. 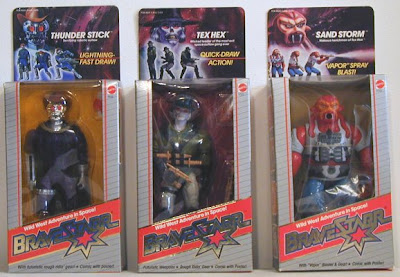 BraveStarr.  Tex was mutated and given magic powers by Stampede including energy bolts, transformation, and summoning creatures called 'fire-snakes'.
Other figures available in the first wave were:
Handlebar – a huge, green-skinned bartender and former space pirate, with a ridiculous bright orange handlebar mustache and a sterotypical New York accent. He used the serving trays as throwing weapons.
Sandstorm – a red reptilian alien who can exhale giant clouds of sand, which the gang usually uses to escape. His race are sometimes called 'sand walruses' and are native to New Texas.
Thirty/Thirty - BraveStarr's talking techno horse, who could "transform" (he could stand on two legs or four so BraveStarr could ride on his back). He carries a giant rifle he refers to as "Sara Jane" and is the last survivor of an ancient civilization called the Equestroids, a cybernetic breed of sentient sentient horses. He was super strong and apparently loosely based on David Lee Roth. Unlike Bravestarr, Thirty Thirty is far more quick tempered and aggressive, which has led to vocal disagreements between them about the use of force in the line of duty.
Skuzz - Tex's cigar-smoking henchman and cousin of Deputy Fuzz - he is apparently the only Prairie Person to have taken up a life of crime. Like Tex Hex, he was mutated by Stampede. Skuzz is often reprimanded by the others for his constant smoking. There was apparantly an episode where Fuzz even arrested Skuzz for this until BraveStarr pointed out that smoking isn't a crime. Though why Skuzz wouldn't be kept in custody for his real crimes remains a mystery. Oh well, Logic was at a premium in 80's cartoons.
Fuzz – a pudgy little prairie dog-like alien, one of the Prairie People, and BraveStarr’s deputy. He serves almost exclusively as a comic relief sidekick character (think Orko or Snarf).
Col.Borobot – a character I could find out nothing about, and
Thunderstick – Tex’s stuttering robot that had a cool arm cannon. (Robots with arm cannons were always cool in the 80’s. 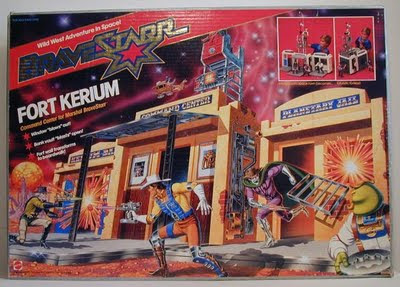 Mattel also offered a kid-sized Neutra-Laser weapon, which worked with the infra-red technology of the action figures, letting kids shoot and “kill” Tex-Hex themseleves. There was also a Fort Kerium playset. A second series of figures was designed but never produced. This included Dingo Dan, Judge JB, Long Arm John, Rampage, and the Starr Hawk vehicle.
All in all, it seems like BraveStarr was the prototypical 80’s toyline – it had an original concept with a deep mythology and good synergy between the toy line and the cartoon. I did some research but couldn't even find a hint of why BraveStarr didn't last longer than one season and one wave of figures. My educated guess at what killed the line would probably be the price point. These figures were enormous by 80's standards, and they cost way more than say, a G.I. Joe figure. Also at that size and price point, stores would have been reluctant to stock many of the toys because they were taking up lots of valuable space and not moving very quickly, if at all. Its a no-brainer for parents if they could grab five or six G.I. Joe figures for the price of one BraveStarr toy, guess which toy is gonna sit on the shelves? I'm also guessing that the case assortments were probably horribly skewed, because as a kid I only ever owned BraveStarr, and despite several trips to the toy store specifically to try and flesh out my collection, BraveStarr himself was the only character you’d ever see on the shelves. Meaning he was probably packing out 4-6 per case with everyone else in the line getting 1-2 per assortment.

JoeyEsq has been hoarding Kerium since 1987, and also possesses the speed of the puma, only not in that way... You can find him ranting and complaining about life, girls, toys and Dunkin Donuts on his own blog, Perpetual Dissatisfaction.
Posted by JoeyESQ at 10:15 PM