Destino: Salvador Dali Teams Up With The House of Mouse... Wait, What??? 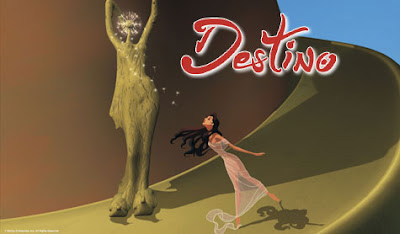 Imagine two great artists such as Salvador Dali and Walt Disney sitting down to collaborate on a animation project. Sounds to insane to be true, right? Well, apparently it wasn't. The idea was pursued by the surrealist artist and the legendary animator, but was scrapped over budgetary reasons. My guess is the studio could not afford the peyote budget these guys would have needed to satisfy their creative needs... Anyways, Walt's son Roy took some of the found footage from 1946 and finished the short film 'Destino' over 50 years later. This one has been around since 2003, but I never saw it and thought you guys might like it. Here it is;

So what did you guys think? Tell us in the comment section below. Via The Wooster Collective.
Posted by Mike D. at 3:36 AM