Breakdown of "The Muppets" Teaser Trailer

It's time to get things started.

By now you've seen the sneaky little teaser for the new Muppet movie. If not...

I tell ya, as much as I love living in the future, one of the real drawbacks is not getting surprised. As much as I love this trailer, I watched it knowing the Muppets were going to show up. I can just imagine myself as a kid, pre-interwebs, sitting in a theater and that thing coming on and totally catching me off guard. Would have blown my monkeylovin mind.

Blah blah blah I'm old and everything is terrible now, ANYWAY. It's a very cute and fun little campaign they have going on (there's a Facebook) and I'm sure a good number of less nerdy people were well surprised.


So I've watched the trailer about 486 times now, combing it for hidden Easter eggs and the like (I have NO IDEA why I'm never surprised anymore) and here's what I came up with...

Amy Adams is apparently teaching an elementary school class on auto repair. Specifically auto repair of the classic Morris Minor........reasonable. The full sized classic car in her classroom is reminiscent of many vehicles from the classic trilogy, most notably perhaps the one sold by Milton Berle for $11.95. 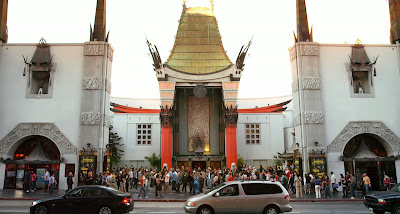 Jason and Amy look to be having a date at Grauman's Chinese Theater, which appears to be showing one of my favorites, Disney's "20,000 Leagues Under The Sea," 'The mightiest motion picture of them all!' Let's hope Lew Zealand is working there and doing his famous 3-D conversion. 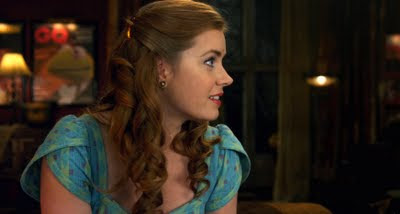 Kermit can be seen in the background here. Rightfully adorning the cover of GQ. Kermit's house perhaps? 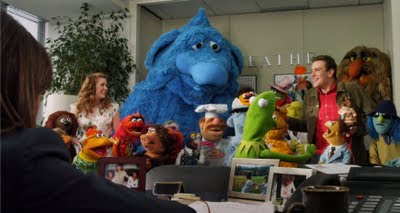 Let's see some Muppets already eh? We get a good look at a bunch of the old favorites, with a few of the new characters. Thog is the giant blue elephant thing, and the new Muppet I'm the most excited about. He looks great, he's like twice the size of Sweetums! There's also a random pig who looks like she might be black in some of the shots. If rumors are true she is some kind of replacement Miss Piggy in Fozzie's recreation attempt, 'The Moopets.' Looks like they are in some kind of talent agency or something here. Based on the picture on the desk I think that's Rashida Jones sitting there. Too bad it's not Dr. Beverly Crusher. 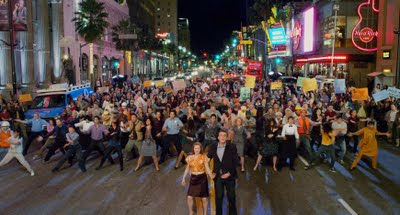 Walter appears to be the main protagonist alongside Segel's character. I'm always a little wary about new additions to large established ensembles, but it's The Muppets so they get the benefit of the doubt. The first few looks we got of the puppet were pretty boring and generic looking, but a few shots in this teaser show it to be a pretty great looking design with a large range of emotion possible. Just look at that face, hilarity incarnate! Note the Kermit t-shirt, he's obviously a fan.

There's been a lot of fuss made about Piggy's Gaga-esque hair here....who cares. She's sporting her trademark ring, and if I had to guess this is her apartment based on the photos of herself in the background. Hard to tell by the window shot where it is exactly, but it certainly appears to be luxurious as is fitting. Donuts! 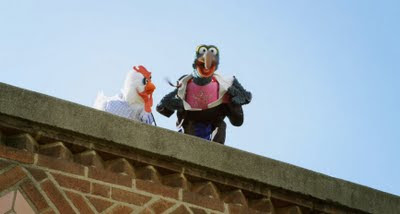 Looks like The Great Gonzo is ready to treat us to some of his trademark daredevil antics. Camilla seems to be wearing some kind of outfit here. Chickens wearing clothes? Now that's just ridiculous. Gonzo is performed and voiced in this movie by the legendary Dave Goelz, as he has been for the last 40+ years. 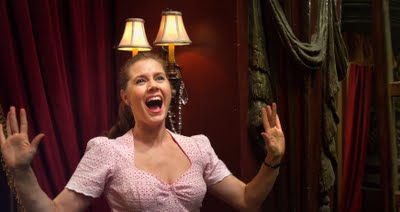 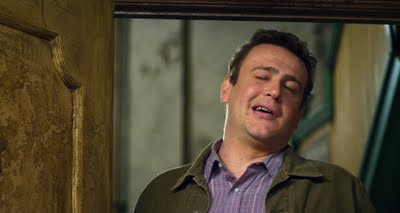 Several shots in the teaser give us a clear indication that the set of the original Muppet Show has been painstakingly recreated. Paint chips, curtain colors, wear and tear all look right out of the 70's. There had been talk that part of the plot revolved around them trying to save the 'Muppet Theater,' but it wasn't immediately clear what exactly that was going to be. The fact that it is THE theater from the show is phenomenal. This type of attention and heart is a big reason I'm looking forward to this update. 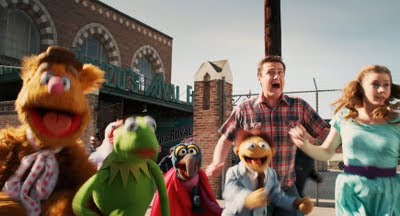 Gonzo's Royal Flush? Awesome. Fleeing from an impending explosion? Has he been operating a plumbing company in the last 12 years? 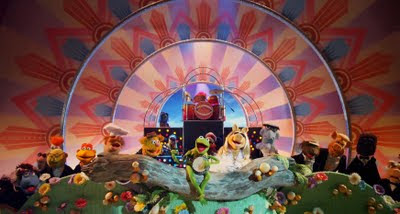 How bout some more Muppets! This looks like a big musical number featuring loads of characters. Some of which I had to look up! Droop, Marvin Suggs, Lew Zealand, Bobby Benson, Beaker, Dr. Honeydew, Scooter, Swedish Chef, Fozzie, Kermit, Miss Piggy, Sam Eagle, Beauregard, Link Hogthrob, Beautiful Day Monster, and Dr. Julius Strangepork. Several of these characters have not appeared in anything in over 30 years. I can't wait to see how many classic puppets they're recreated. The stage looks to be right from The Muppet Show along with the famous Dr. Teeth drum kit. Kermit's got his banjo...Rainbow Connection maybe? 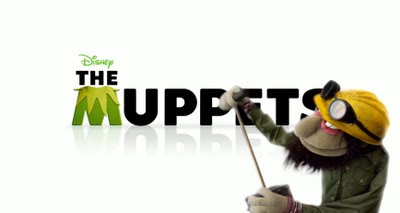 The more recent Muppet outings featured The Muppets as actors. They were playing parts in Christmas Carol, Treasure Island etc. I was tired of seeing them paraded out in different costumes. The Muppets don't need to play other characters, they are the characters and at their strongest and most focused they are vaudevillian. They are song and dance men ready to put on a show. That might be why I love those older movies and the show the most. It was The Muppets as The Muppets being The Muppets.