Fin Fang Foom is one of the coolest villains in the whole Marvel Universe. Not to mention that its complete bullshit that he doesn't fuck Iron Man & The Fantastic Four up every time he encounters them. This is a MOTHERFUCKING DRAGON... he gotta win every once in a blue, no? Well, this fantastic character was created in 1961 by Jack Kirby & Stan Lee and has been in and out of story lines across the board ever since. His first appearance was in 'Strange Tales' #89 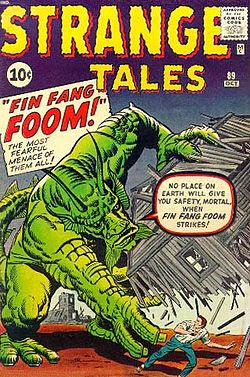 Instead of featuring pictures of Fin Fang Foom from the pages of the Marvel Comics you might know him from, I am choosing to feature some Deviant Art versions instead. I hope you enjoy them... some day Foom, you will have your chance to be the boss!!!


Click all the artist names to see all the rest of their great work.... these guys did ole Foomy justice!!!
Posted by Mike D. at 5:15 AM