I really loved this 80's cartoon that was one of the first English series to cross over and achieve mainstream success here in the USA. I fondly remember watching the adventures of this super sarcastic & cocky James Bond-esque mouse with an eye patch and his spectacled sidekick, 'Penfold' (a hamster), doing battle against various villains such as 'Baron Silas', 'Greenback', and 'Count Duckula'. 'Count Duckula' himself was re-invented in his own cartoon series as a hero instead of a villain after he was defeated by 'Danger Mouse'. That cartoon was also very cool. 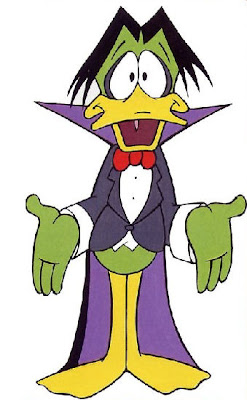 The series has lived on for over 25 years, has 161 total episodes, and will forever be a part of my childhood memories. That theme song rings in my ears to this day... and in my opinion DM is right up there with Mickey & Splinter as some of the coolest rodents I have ever experienced. Watch out for that bomb DM!!!


Take a few minutes and watch the complete pilot episode from the cartoon: