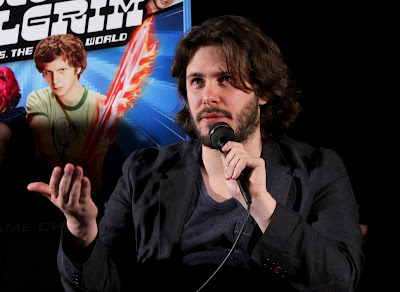 Edgar Wright is one of my favorite film directors in the game today. I also love to follow his blog, which he uses as a regular forum to stay in touch with his fans. A few days ago he posted this cool ass montage of scenes involving guns that he compiled when he was 19 years old. Its called 'Gun Fetish', and you can check it out here:

Here is what Wright had to say in the post:
Very cool to get a bit of insight into a successful directors early work... and to get an explanation to boot!!! All in all, a cool trip down memory lane.


Recently I have been sent, have enjoyed and have reposted lots of filmic mash ups and montages. Some of them by editors as young as nineteen, such as Joel Walden who gave us this most recently. The montages I’m sent make me a little nostalgic, because that’s exactly what I was doing at age 19. In between making amateur no budget films as a teen, I’d teach myself to edit by cutting together montages of movie clips on a theme. You might have heard me talking to Kevin Smith about it on a recent podcast. The following clip I edited together while at Bournemouth Art College. Way before I’d ever seen an Avid suite, this was done over some long weekends locked in a VHS tape to tape editing suite. Yes, VHS! So if you are wondering about the low quality of the sound and visuals in the following montage, there’s a simple answer. All of the clips were sourced from either films I’ve recorded off the TV, sell thru VHS tapes I had bought and also films that happened to be in the college library. I literally had piles of VHS tapes in the edit suite. So that explains some of the glitchy clips. As for the audio edits, hey it was VHS and I was 19. This is the first time I used a ‘real’ editing suite. So cast your minds back to the last century and see how I misspent my youth; cutting together bullet ballets to John Lennon’s melodic attack on the NRA. I give you my 1993 mash up; ‘Gun Fetish’.