Taxi Driver: The 35th Anniversary Will Be Re-Released In Theaters

To celebrate the 35th anniversary of Martin Scorcese's titular "good guy that does bad things" movie that brought the rise of Robert De Niro to a head, AMC theaters has decided to show the film in a beautiful Digitally Restored version of it for a few days in late March. I think this is a great idea, one that should be embraced by both studios and theaters alike. Think about it... both sides are complaining that they are losing money hand over fist. What better way to lure people back to the theater then by offering classics on the big screen? They are a sure thing (they are already successful), people already love them (they have a built in audience), and will surely generate money from people who want to see a past film in an actual theater (in this case something I was not able to do, since 'Taxi Driver' was released in 1976 & I was born in 1979). They should consider it more often. 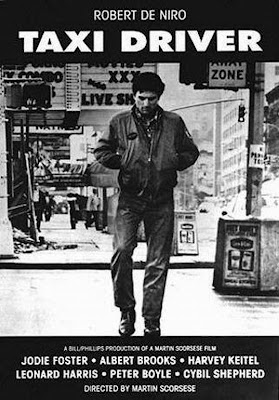 The showings will be on March 19th & March 22nd, and only at selected AMC theaters. Click here to see which ones in your area will be showing the film. Shockingly, they list over 20 theaters in the NYC area, but I was only able to find two that were truly in NY. The others are found in NJ, albeit not far from the NY border. Who wants to check this puppy out? Get at me at mdevito730@gmail.com and let me know!!!
Posted by Mike D. at 12:02 AM