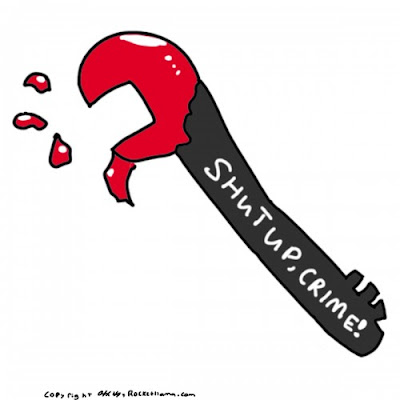 Last night I had the good fortune to score a few seats for a preview of James Gunn's newest film, 'Super'. I am a big fan of Gunn's other films 'Tromeo & Juliet' & 'Slither', so when I obtained my seats for this preview screening I became super excited. The screening was held at the ReRun Gastropub Theater in Brooklyn, NY... and lets just say this may be the best place I have ever watched a movie. They have a gourmet menu (I had a stuffed foccacia sandwich filled pulled pork for Christ sakes... these guys are no joke!) and a full bar. They also offer awesome beer specials, like four Fosters 24oz oil cans for 24 bucks (that's a ton of beer right there). I plan on writing a post about Rerun another time... curator Aaron Hillis and the gang over there are handling business!!! 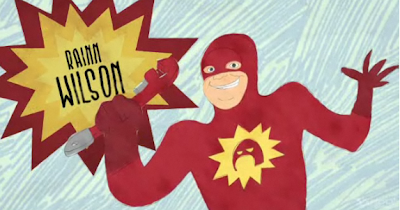 I was supposed to attend this screening with my partner in crime Jeff Bond, but due to a turn of events Jeff couldn't make it. So instead I met up with CCD's art critic extraordinaire Briana Melendez for the excursion. Bri was excited to see the film because of Nathan Fillon's involvement in the movie... and she made a very capable drinking buddy (those Foster's weren't gonna drink themselves, right?). We settled in with our sammy's and our brews for what we thought was going to be a superhero movie. Boy were we in for a surprise...

The movie started with one of the most insane animated sequences I have ever seen. Gunn has a history with animation, so I am wondering if he completed this segment on his own. It's so cool, showing of the hero of the film "The Crimson Bolt" using a whole bunch of superpowers that he doesn't have... if he were a real superhero, this would be the stuff he might do. Instead, we meet Frank (Rainn Wilson). Frank is a cornball, a cook a the local diner who is married to a very cute Sarah (Liv Tyler).

But Frank starts to notice Sarah is changing... she is slipping back down the road of drug use and Frank feels like he is losing her. Then one morning Jacques (Kevin Bacon) shows up for breakfast looking for her. Bacon eats breakfast with Frank, and exudes slime ball as he tells Frank to let Sarah know he stopped by. Within 3 days she is gone, leaving Frank. He shows up at the strip club Jacque owns (Bare Assets..lol) and confronts his ex alongside Jacques' gang (Gunn favorite Michael Rooker has the most awesome hairdo's ever!) and ends up getting stomped out. Thus begins the transformation of Frank into "The Crimson Bolt". 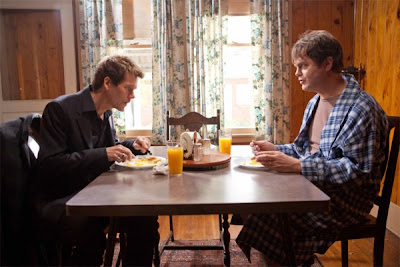 Frank is healing up and watching TV when he comes across a cable access religious show featuring the Christian superhero ""The Holy Avenger" (Fillion). Throw in a creepy tentacled filled vision of Frank being touched by God (words do it no justice), and Bolt is born. He begins researching his character by studying superheroes with no powers that rely on weapons. 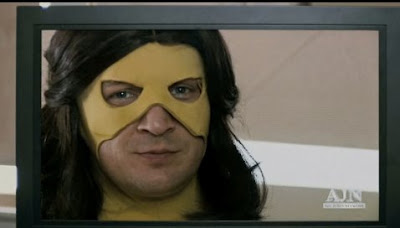 He makes a friend in Libby (Ellen Page), who is a nerd chick who works at the comic store. He adopts a pipe wrench as his weapon of choice, perfects his costume and hits the street to fight crime. Well... fighting crime may be a bit of a stretch. Lets just say a bunch of people get smacked with wrenches and will probably re-think their lives of small time crime. Libby becomes his sidekick Boltie and they work their way up to the confrontation Frank has been waiting for: To take down Jacque and his crew.

I'm not going to go any further or get any more specific... I want you to see it for yourself. But I will tell you guys what I liked the best. Here are a few my highlights:
All in all, a solid effort. The movie opens in major cities on April 1st, but will also be available on Video On Demand through IFC films as well. I strongly suggest you watch it... this is history in the making, because 'Super' is sure to become a cult classic in the future.
Mike's Rating: 4.5/5 stars 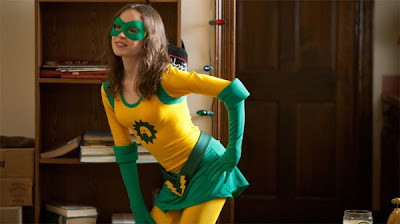